This is the fourth full-length novel in this entertaining series featuring the pair of Victorian sleuths battling all manner of evil-doers, with gothic overtones and all manner of intriguing steam-powered contraptions. I have really enjoyed the books up to now – see my reviews of The Osiris Ritual and The Immorality Engine – so will I enjoy this latest instalment? 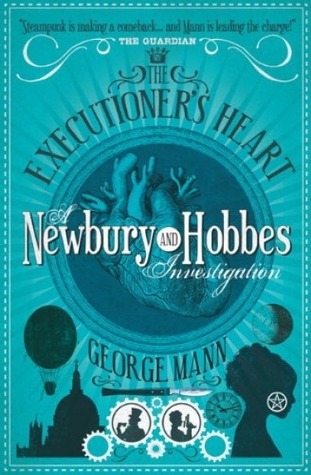 When Charles Bainbridge, Chief Inspector of Scotland Yard, is called to the scene of the third murder in quick succession where the victim’s chest has been cracked open and their heart torn out, he sends for supernatural specialist Sir Maurice Newbury and his determined assistant, Miss Veronica Hobbes. The two detectives discover that the killings may be the work of a mercenary known as the Executioner. French, uncannily beautiful, her flesh covered in tattoos and inlaid with precious metals, the Executioner is famed throughout Europe. But her heart is damaged, leaving her an emotionless shell, inexplicably driven to collect her victims’ hearts as trophies.

This book immediately plunges us into a tension-filled scene where we witness a terrible event overtaking one of the main protagonists – and then the narrative timeline jumps backwards to the events leading up to it… We regularly see this device in the CSI franchise, but it occurs less often in books. It certainly works here. The character in questions happens to be my favourite, so I was gripped by the need to discover exactly what went on and ensure that this major character emerges from her terrible experience unscathed.

I also liked the fact that we were taken into the world of this shadowy assailant, learning of her tragic past and how she turned into this merciless, brutal killer. It is always a bonus when the main antagonist has a convincing backstory which gives us an insight as to how she becomes a heartless murderer.

Alongside this ongoing investigation, is the ongoing tension from the overarching narrative arc and the continuing shockwaves from the shocking denouement from the previous book, The Immorality Engine. All series deserve to be read in the correct order, and while you could crash into the middle of this one (for once, something I didn’t do…) because of the characters’ journey and development, it really pays to read these in sequence.

I enjoy this world – steampunk at its best can be great fun, and Mann has Queen Victoria hooked up to a steam-powered life support machine, growing ever more paranoid and lethal. As those tasked with keeping law and order in her capital city, Newbury and Hobbes are unavoidably caught up in her machinations. But the newly emerging Secret Service is also causing concern – are they a nest of traitors, colluding with the German agents plotting for the Kaiser to overthrow Victoria? She certainly thinks so.

This could all collapse into a real mess if not handled with skill. It doesn’t. The climax is every bit as shocking as the explosive finish to The Immorality Engine and leaves the book on something of a cliffhanger. I’m not going to say more, but I’m certainly looking forward to the next instalment The Revenant Express, due out next year.