I’ve loved Ann Aguirre’s Sirantha Jax series – see my review of Grimspace here. So I was excited to spot this steampunk crime offering, which is a joint effort between herself and her husband Andre. Would I enjoy it as much as her punchy space opera series? 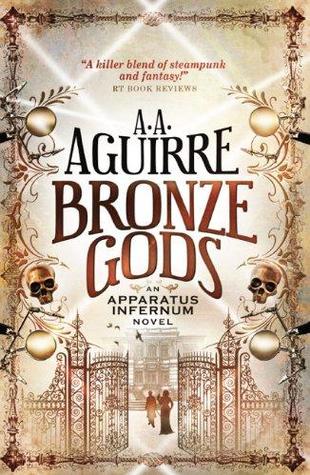 Janus Mikani and Celeste Ritsuko work all hours in the Criminal Investigation Division, keeping the citizens of Dorstaad safe. He’s a charming rogue with Fae blood and an uncanny sixth sense; she’s all logic – and the first female inspector. Between them they collar more criminals than any other partnership in the CID. Then they’re assigned a potentially volatile case where one misstep could end their careers. The daughter of one of the great houses is found murdered – her body charred to cinders by an intricate and deadly device. A ruthless killer is stalking the gaslit streets, weaving blood and magic in a lethal ritual that could mean the end of everything they hold dear…

The worldbuilding is dealt with in the prologue – I really like the mash-up of classic steampunk with strong fantasy elements, like a diminished Fae race. And it means that some of the more unpleasant prejudices embedded in the classic Victorian steampunk genre are deftly sidestepped – though a tendency to keep women firmly in the home is still a major feature.

But in order for this novel to succeed, the partnership between Janus and Celeste must work – and it certainly does. I very much enjoyed the dual level at which they function, with Celeste dealing with suspects or persons of interest on a human level, with Janus extending his Fae sensibilities to assist in working out who is lying. It is nicely done. Their relationship is also shifting, as their former romantic attachments now are no longer attached. Yep. I know it all sounds something of a cliché – but the strong characterisation and enjoyable twists and turns are engrossing and very readable.

I turned to this offering when smitten with a heavy cold, and it certainly took my mind off my physical miseries. The murder mystery is well handled – I generally don’t bother to expend too much energy trying to figure out whodunit, but I did have my own theories as to who did what to whom, which all turned out to be completely wrong. Always the mark of a well-plotted mystery.

The final denouement was suitably exciting, producing a handful of major gamechangers and one major dangling plot thread that will be dealt with in the next book, Silver Mirrors, which I am definitely tracking down.
8/10