Following on from Irons in the Fire, this is the second book in this interesting fantasy series, where McKenna attempts to chart a revolution from its inception through to the consequences in a more realistic, nuanced manner than the typical high fantasy – bad, evil Emperor/undead King has arisen after centuries of having been forgotten and the current, good populace and Ruling Family have to scramble to catch up, etc, etc….

Those exiles and rebels determined to bring peace to Lescar discover the true cost of war. Courage and friendships are tested to breaking point. Who will pay such heartbreaking penalties for their boldness? Who will pay the ultimate price? The dukes of Lescar aren’t about to give up their wealth and power without a fight. Nor will they pass up some chance to advance their own interests, if one of their rivals suffers in all this upheaval. The duchesses have their own part to play, more subtle but no less deadly. 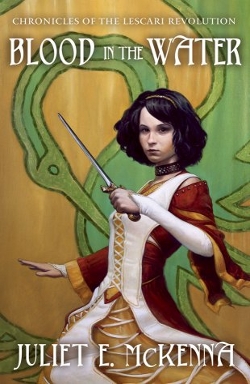 That’s the blurb – and for starters, congratulations on all involved for not muddling the term ‘blurb’ with ‘synopsis’. I’ve become really fed up with the slew of books I’ve read recently that have given away major plot spoilers on the back cover – nothing of the sort going on here, I’m delighted to report.  So, the first question has to be – has McKenna succeeded in accurately depicting an uprising organised and funded by a handful of well-meaning people in a politically complex situation? The answer is ‘yes’. McKenna’s strength is world-building. She manages to produce a character-led story about a world with a labyrinthine historical and political backstory. While in the various viewpoints of her cast of characters, McKenna manages to lay out the various factions, each with a divergent set of loyalties driven by feuding, ambition and fear. We see how the conspirators begin to quarrel as events roll forward – and, importantly, we also see how the war affects protagonists on both sides of the conflict.

The story structure works well as the initial scene setting inevitably takes some time – something that didn’t bother me. What I did enjoy was the way the narrative pace steadily built to the series of gripping, well written battle scenes, which in no way glorified the business of warfare and its consequences. I particularly liked the premise that as the campaign wore on and the stakes became higher, those involved became ever more willing to consider less honourable tactics. The use of magic in the book was well handled. I liked the sense of discomfort shown when a scryer learnt intimate personal information leaked by his fellow magic user – it was also a handy device for keeping the plot moving along and giving the reader different takes on the same situation.

In a cast of characters of this size, there is inevitably going to be one or more who stand out from the crowd. I really enjoyed Litasse and her gutsy reaction to her numerous reverses of fortune. The other character particularly well drawn, is Ameril. It is always difficult to portray a character who has a severe disability and McKenna conveys his physical frailty and pain convincingly without holding up the plotline.

Any niggles? Given the scope of the book and the number of protagonists, it is a very big ask for all to work equally well. While McKenna has all the military and political machinations impressively nailed, I felt less convinced about some of her characters’ private lives. The relationship between Tathrin and Failla seemed rather lifeless in an environment where personal feelings tend to be heightened by the danger. I was also rather confused as to the scope and severity of Branca’s injuries at the end of the story. But, taken as a whole, these are minor concerns set against what the book is trying to achieve. It is an ambitious series that largely succeeds and I’m looking forward to reading the final instalment.
9/10