Robert Winder certainly aims high. Not only does this fictionalised account of William Shakespeare’s final play concentrate on how he managed to create such a fine body of work; a subject that is probably discussed in every school, college and university where Shakespeare’s work is studied – Winder actually produces a five act version of the lost play, Henry VII, written in blank verse…

London, 1613. The Elizabethan golden age is over, replaced by James I’s reign of terror, and William Shakespeare has been ordered 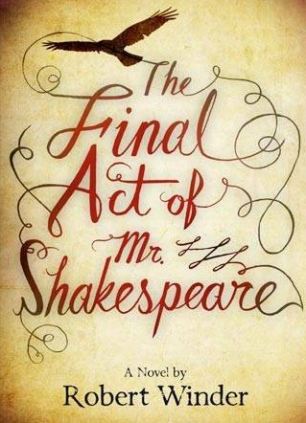 out of retirement to write one last play – a flattering treatment of James’ grandfather, Henry VIII. He gathers together his devoted troupe, The King’s Men, and they start work. However, after realising exactly how much Londoners are suffering under James, Shakespeare is driven to create something else – something far more dangerous. Something that he comes to believe will be his best work ever – his searing attack on monarchy in Henry VII is the play that he is proud to leave for posterity…

So – does Winder pull off this ambitious historical novel? First the good news. Winder has clearly rolled up his sleeves and done the necessary exhaustive research – and managed not to make it unduly show. Jacobean London is vividly depicted, complete with the sense of paranoia. All the main characters are well rounded and believable – even if I don’t agree with his take on Shakespeare. At the start of the book, William Shakespeare is portrayed as depressed, middle-aged and written out, feeling ashamed of the political foot-shuffling that produced works such as Richard III. When scooped up and ordered to produce another play by James’ henchman Edward Coke, he feels angry, humiliated and defiantly rebellious.

Hm – not too sure about this. While Elizabethan England may have produced a flowering of English literature with Shakespeare the undoubted pick of the crop, no one should go away with the notion that it was an age of political permissiveness. There was an extensive spy network operating throughout London during Elizabeth’s reign and if your face didn’t fit for whatever reason, you could find yourself whisked off to the Tower and there were no checks and balances to stop you being horribly tortured. Just because England managed to – somehow – survive against the might of the Spanish Armada, the prevailing view in Europe and amongst many informed Englishmen, was that it was just a matter of time before England fell under the control of Spain. The paranoia gripping the capital in the years after the Gunpowder Plot would have – surely – been entirely familiar to Shakespeare.

I also found the cagey, secretive character that Winder depicted lacking both charm and humour. It didn’t help that Winder wrote in limited omniscience, so that we kept sliding out of Shakespeare’s voice and back into Winder’s viewpoint. This hampered my bonding with Shakespeare, which was key to the novel. While I completely agree that he may have not been the rumbustious hell-raiser downing pints with Marlowe that has been formerly characterised, neither do I feel that this double-dealing, grumpy old git who carped about Edward Alleyn’s desire for Constance Donne, would have been capable of engendering the loyalty and affection shown him by The King’s Men. Just why  do they all risk life and limb – literally – to put on this seditious play? There was never a sufficiently pressing reason why these well established, successful folk would commit such a foolhardy act. The Shakespeare that sings off the page in his plays and incomparable poetry, bears no resemblance to the dangerously impetuous misery that stomps through the pages of this book.

As for the play… Having failed to convince me that Shakespeare would have risked his closest friends in such a reckless venture, I was interested to see how his effort to write a Shakespearean masterpiece would stand up. In fact, the blank verse is impressive. No doubt about it – Winder is a gifted chap. And the idea of the story is an intriguing one. There was much in the book that I enjoyed – but I never believed that the creator of King Lear, Midsummer Night’s Dream and Hamlet would be so stupidly pigheaded as to plunge himself and the people he cared about into such a dangerous project – all for the sake of posterity.
7/10