Mars Evacuees is a solid family favourite – not only loved by Himself and me, but also by the grandchildren, who loved listening to the story of Alice and her adventures on Mars. So we were all excited and looking forward to reading this next instalment. Did it live up to expectations? 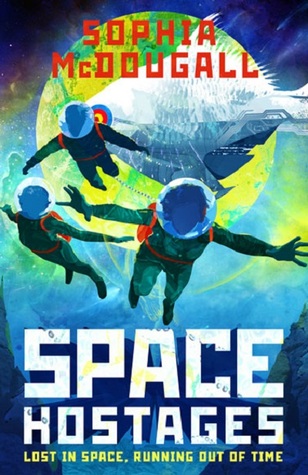 You can’t cry in Space, but I was giving it a good go. After all, I’d just been THROWN OUT OF AN AIRLOCK by a horde of ALIENS had about three minutes left to live. So you can’t blame me for trying. But as it turned out, that was just the start of my adventures… Because very soon it became clear that if I was ever going to get back home, not only would I have to NOT DIE, but me, my friends and our floating robot goldfish would have to SAVE THE WORLD. No, scrap that. THREE WORLDS. All at the same time. Easy, right?

Firstly, huge kudos to the blurb. Sharp and snappy, with just enough information to tempt without providing too many spoilers, it also exactly captures the flavour of Alice’s first person narrative. I love this character. Alice is a tween, one minute behaving like a snarky teenager, while the next seeming a whole lot younger which is spot one for the age-group. She also has the hard edge that comes with having to deal with the privation that comes with war and its subsequent hardship. While McDougall ensures there are plenty of laughs in both books, she never disguises the wrenching fear and grief that children caught up in war have to deal with.

In fact, the worldbuilding is brilliant. While the adventures Alice and her companions undergo are all out of this world – McDougall ensures that their progression through the alien space ship and experiences on the planet are plausible. There is none of the sloppy nonsense in the name of science fiction we endured in that dreadful film Home, I’m delighted to say. The planet is vividly evoked in delightful detail, without holding up the pace of the narrative, giving us a sense of wonder and difference the best science fiction provides. While there aren’t quite so many laugh-aloud moments in Space Hostages as occurred in Mars Evacuees, Frankie and I still found ourselves giggling at the antics of the goldfish and Alice’s dust-dry sarcasm.

Any niggles? Reading this aloud, meant I had to negotiate the strings of weird lettering representing the alien’s language and frankly, I could have done with less of it. Inevitably, it was translated anyway and trying to decode it convincingly was something of a pain, as well as holding up the narrative. However, set against all the fun, thrills and wonder this book creates, it is a minor grumble, though I do wonder how newly independent readers might cope.

The denouement was beautifully handled and the story wrapped up to our complete satisfaction – and given the desperate straits Alice and her friends were in, that is no mean feat. My mission is to continue to provide my very dyslexic granddaughter with strong reasons to continue battling with her disability in order to become sufficiently literate to cope in a modern world. I’m humbly grateful that gifted authors like Sophia McDougall make my task a whole lot easier.
9/10