This Kindle edition of Eric Brown’s interesting offering caught my eye as I enjoyed Brown’s Bengal Station trilogy. The most professionally produced ebook I’ve read so far, I didn’t notice any typos or mistakes and the formatting was flawless. Once I finished the novel, there was an additional collection of short stories, all set in the same world.

Once the Enginemen pushed bigships through the cobalt glory of the nada-continuum. But faster than light isn’t fast enough anymore. The interfaces of the Keilor-Vincicoff Organisation bring planets light years distant a simple step away. Then a man with half a face offers ex-Engineman Ralph Mirren the chance to escape his ruined life and push a ship to an undisclosed destination. The nada-continuum holds the key to Ralph’s future. What he cannot anticipate is its universal importance – nor the mystery awaiting him on the distant colony world.

And there you have it. This isn’t full-on, action-stuffed adventure that whisks you up on page one and doesn’t let you catch your 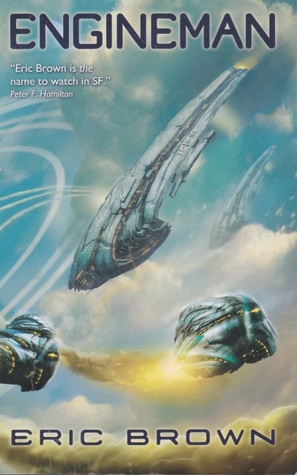 breath until the closing sentence. This is an adventure, alright and it steadily gains momentum as the book progresses, but this particular world is an intrinsic part of the story and as such, Brown is at pains to set the scene. Paris is vividly described as a fading city, overrun in parts with alien vegetation as the population continues to move away to more thriving places, both on and off Earth. The previously bustling port and centre of the bigship industry is sliding into inexorable decline – I felt there was a strong comparison to the Port of London after cargo containerisation became the norm. And just as parts of Paris are no longer vital, neither are the Enginemen – those once elite corps of men and women whose brainwaves ‘pushed’ the bigships into the nada-continuum while in a trance-like state called the flux, allowing the ships to travel thousands of light-years in a matter of weeks and months. However, once interfaces were invented so that people could actually walk or drive through to colony planets, the Enginemen were obsolete and unwanted…

The book explores the plight which echoes that of generations of men and women through the ages who have found their skills are suddenly redundant.  Many of these highly skilled people, hungering for the neural high they can only achieve when pushing bigships, take refuge in the religion of the Enginemen – while others cannot manage to grasp at the comfort that this spirituality offers.  This is science fiction at its best – looking at contemporary issues through a futuristic lens…

Brown’s world is so engrossing, the story running through it was almost a distraction and I wasn’t wholly convinced by the ending, which I felt was a bit too unconvincingly upbeat, given the gnarly issues that Brown addresses. However as it got going, it drew me in and I particularly became involved in Ellie’s plotline. I think that Brown’s female protagonists work better than his men – a tendency that is emphasised in the short stories. That said, the characters were all suitably complex and interesting and held my interest throughout.

Any grizzles? Well… it might be a picky point – but as the world is so carefully constructed, it did somewhat jar that as all this alien vegetation engulfed chunks of Paris, at no point did anyone mention any attempts to control or monitor what was growing. Even in a rundown area, I still think there would be – at sporadic intervals – fully overalled, masked teams stomping through, spraying various noxious substances around the place, probably with a glorious disregard for human health, this being a Brown novel. Even if it wasn’t effective, humanity’s hang-ups about the ‘other’ would not tolerate such a laissez-faire attitude to rampant creepers punching through buildings…  In the scheme of things, though, this is a relatively minor point and despite my misgivings about the ending, I think Engineman is an excellent read, raising some pertinent questions about how technology is constantly stranding groups of people who strained to train to acquire a skill – only to find themselves on the scrapheap a few years further down the line.

Which brings me onto the short stories. As they were set in the same world, often addressing the same themes and echoing some of the plotpoints in the novel, I got the impression that a number of them were written alongside the book, helping Brown ‘write his way’ into the storyline. As a result, I found a number of them were so similar in tone and plot to aspects of the novel, I don’t think they offered very much in the way of extra insights into the world. This is particularly applicable to The Girl Who Died for Art and Lived and the award-winning The Time-Elapsed Man. Both were excellent stories, but I do question whether they should have been at the end of this particular book. However, a couple did break away from this tendency and I found Big Trouble Upstairs and The Pineal-Zen Equation really enjoyable reads.

Overall, I thoroughly recommend this ambitious book, which will leave me pondering some of the ideas it raises for a long time to come.

A Simpler Way to Finance