We don’t buy many hardback books – we simply cannot afford it. But there are a few authors that we both love with a passion and cannot resist acquiring as soon as their books become available – Robin Hobb is one of that handful. 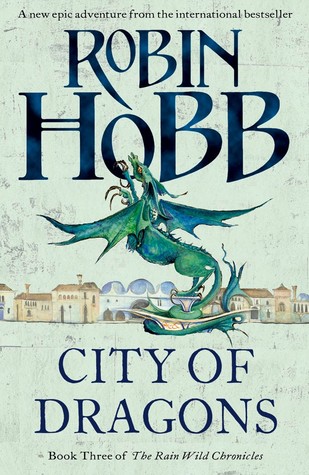 So – the question has to be – does City of Dragons live up to our expectations? Does it both continue the ongoing story about the stunted creatures sent up the lethally toxic river, along with the bunch of Changed youngsters that no one wanted around anymore – and provide yet more narrative tension as new plotlines draw us further into the world? I’m not going to reproduce the jacket blurb, as it travels deep into Spoiler country – and while those who regularly read my reviews know of my rants against blurting blurbs, in all honesty when you are into Book 3 of an ongoing series, it gets very difficult to avoid. Especially as the blurb reads more like the Story So Far. There are series where reading volume three of the adventure means that it’s hardly worth your trouble backtracking to the previous two books – but The Rain Wild Chronicles doesn’t fall into the category. Hobb is such a fine writer and weaves so much characterisation, wonderful scene setting and intriguing layers that are later picked up and further explored in interesting ways, that it would be a crying shame if you missed out on the pleasure of the two previous offerings. And if you haven’t picked up a Robin Hobb before, then don’t start with The Rain Wild Chronicles – you are selling yourself and the whole series short if you don’t at least read The Liveship Traders trilogy before this one.

As you may have gathered, I am something of a fan… and the answer to my earlier questions is yes. Hobb succeeds in re-establishing the main characters, along with their ongoing problems and still providing further knotty issues for them to confront. My favourite characters continue to be Thymara and Alise – along with the magnificently imperious Tintaglia and Sintara. But there is a varied cast whose viewpoints pull the story along, with some suitably threatening antagonists.  The ailing Duke of Chalced is a satisfying study in utter megalomania and we also continue to follow Alise’s self-absorbed husband, Hest Finbok, as he has to face to prospect that both Alise and Sedric, his former secretary, have apparently deserted their former lives.

It is interesting that Hobb has chosen to depict a same sex relationship in this series – and fairly courageous, as initially the main instigator is Hest, who is less than sympathetic. I was relieved to see that she has progressed this storyline and created a close, loving couple that we care about.

Hobb is masterful at scene setting – she manages to depict the eerie deserted streets of Kelsingra with the same vividness as the bustling trading settlement of Cassarick and the relatively established sophistication of Bingtown. Hobb has situated most of her previous trilogies in this setting – and it shows. There is the depth and layering of a fully realised world that you also see in Juliet E. McKenna’s work, where the author is aware of all the factions, with the resultant political tensions threading through the various storylines.

Any niggles? Well… I had assumed that as Hobb has presented us with a series of trilogies, that City of Dragons would wrap everything up – and it doesn’t. It has been a feature of this particular series that the endings of the books don’t provide a satisfying conclusion to any of the major plot threads. Ho hum – just need to grit my teeth and wait for Blood of Dragons to be released. In the meantime, it’s something to look forward to… more Robin Hobb!
10/10