I’d read Storm Born and enjoyed it sufficiently that when I saw Thorn Queen was now out, I decided to give it a go.

Eugenie Markham is a shaman for hire. She’s paid to bind and banish creatures from the Otherworld… But something happened after her last battle. She became queen of the Thorn Land. That said, with her kingdom in tatters, her love life in chaos and Eugenie eager to avoid the prophecy about her firstborn destroying mankind, the job’s really not all it’s cracked up to be.

Now young girls are disappearing from the Otherworld and no one seems willing to find out why. Or put a stop to it. Not that Eugenie’s 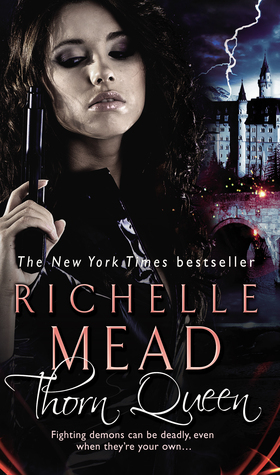 fazed by spilling fey blood, but this enemy is shrewd, subtle and dangerous – and nursing a very personal grudge. Eugenie must venture deep into the Otherworld and trust in a power she can barely control. She may be a reluctant queen but she’s vowed to do her duty, even if that means facing the darkest – and deadliest – side of her own nature…

In many ways this is classic urban fantasy. A feisty, yet torn heroine with more power than she knows what to do with, along with an overly complicated love life. However, I enjoyed the twist at the end of the first book that saddles Eugenie with the responsibility of a fey kingdom – something she is clearly not equipped to deal with. I liked the fact that Mead doesn’t put a gloss on her rather self-centred approach and as the book is in first person viewpoint, we get a ringside seat to Eugenie’s gradual appreciation of just how much her own actions impact on the populace within the Thorn Kingdom. In fact, this book is all about Eugenie’s uncertain journey towards emotional maturity and her attempts to cope with her inherited powers. And along the way, there is plenty of action – notably in the bedroom. When Eugenie isn’t having enjoyable and fairly graphic sex, she is trying to juggle the responsibilities of being a monarch in the Otherworld with her everyday life among humans and keeping the new developments from her parents. There isn’t the same chirpy humour that was evident in Storm Born, but as Mead piles the pressure onto our hapless heroine, her laconic asides would be rather jarring and out of place.

Mead writes well and I was quickly drawn into the narrative, finding Eugenie’s flailing attempts to come to terms with her new role plausible and appreciated how her subsequent adventures noticeably impact on her character. Far too many protagonists appear to bounce back relatively unscathed after all sorts of horrendous experiences – not so Eugenie. In common with the better written series, the supporting cast of characters also continue to develop in complexity and become more layered and interesting. I’m fascinated to discover whether King Dorian is really a good guy, who’s too cool to let his better nature always come to the surface – or whether he is a complete rat, whose personal charm actually hides the full extent of his selfish nature.

Any quibbles? Well, the cover portrays a sultry, dark haired beauty while the book mentions repeatedly that Eugenie is red haired and green eyed. So Bantam Books get a major slapped wrist for such sloppiness – I personally find this kind of mismatch insulting to both reader and author. Mead is at pains to carefully build up a detailed description of her heroine – and to find the cover depicting a woman so clearly at variance with Eugenie jars all my sensibilities as a reader. What were they thinking over at Bantam – that we wouldn’t notice?? Other than that – no. If you are an urban fantasy fan and haven’t come across this particular series, go find Storm Born and then pick up this sequel – you’ll be rewarded by an enjoyable, well written adventure.
8/10