This has got to be one of my most eagerly anticipated reads of the year so far, given how much I enjoyed Adrian Tchaikovsky’s Redemption’s Blade. I was particularly intrigued that Justina Robson wrote this sequel, using Tachaikovsky’s world. 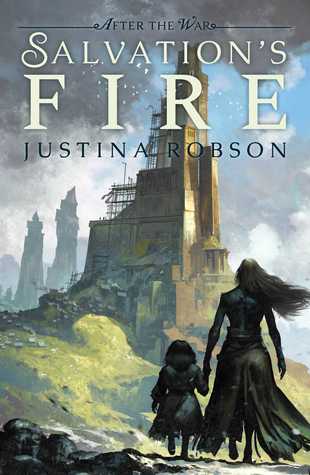 The Tzarkomen necromancers sacrificed a thousand women to create a Bride for the Kinslayer so he would spare them in the war. But the Kinslayer is dead and now the creation intended to ensure his eternal rule lies abandoned by its makers in the last place in the world that anyone would look for it. Which doesn’t prevent someone finding her by accident. Will the Bride return the gods to the world or will she bring the end of days? It all depends on the one who found her, Kula, a broken-hearted little girl with nothing left to lose.

So does this one work? Oh yes – this is an amazing premise. The Bride returning to the world long after the tyrant she was designed to partner, has been vanquished. What is her purpose now? And perhaps even more importantly – what will she decide to do, now her bridegroom is dead? The opening sequences surrounding the circumstances where we see the Bride return are really gripping, though I have a hunch if you haven’t read Redemption’s Blade, you might not appreciate the importance of the place and significance of what is happening. This is one sequel that should not be read as a stand-alone, in my opinion – apart from anything else it would be a crying shame to miss out on the joy that is Redemption’s Blade.

Part of the fun of reading a series is to chart the development of the main characters. If I have a niggle with this particular story, it is that Celestine, whose energy and concerns pinged off the pages in the first book, is a pale shadow in this adventure. While she is constantly around, I did find it frustrating not to have her opinions as vibrantly represented as in Tchaikovsky’s tale.

The other issue, which is more of an observation rather than a criticism, is that Robson’s style is denser than Tchaikovsky’s and I had to slow down and pay more attention to the text than when reading the first book. That said, I am a fan of Justina Robson’s writing – see my review of Down to the Bone – and am familiar with her style. I was fascinated to see how each author presented this interesting, complex world. I very much enjoyed the strong relationship between the newly resurrected Bride and the orphaned child, Kula – it isn’t often we see any form of parental relationships explored in science fiction and fantasy and I was delighted to watch how this partnership developed throughout the story.

Overall, I thoroughly enjoyed this one and would be happy to see Angry Robot approach another author to take this story on further. Or maybe have both Tchaikovsky and Robson follow up their efforts with another book each. However it’s done, I really, really hope this series continues – there is so much more I would like to know about these characters and this world. Recommended for fans of epic fantasy with a difference. While I obtained an arc of Salvation’s Fire: After the War from the publisher via Netgalley, the opinions I have expressed are unbiased and my own.
9/10