All subgenres of Science Fiction are included: Space Opera, Humor, TechnoThrillers, Military, Hard Science, Time Travel, Fantasy, Adventure and YA.
It’s a big universe out there…so Buckle-Up Buttercup–you’re in for a wild ride! Find your New Favorite Author and leave a Great Review.

Once again, I am part of a wonderful Instafreebie giveaway where all 54 novels on offer provide offworld adventures. I shall be featuring a selection of the free books so if you see something that takes your fancy, you can click on the link above and claim it…

“He wasn’t human. You’ve discovered the existence of a new enemy combatant, Captain. Since you saw

him – he saw you.”
150 years after the last war, humanity has united in exploring space with colonies on its moon and Mars. But the Europa Mission has just failed and 152 people died in space. No one knows why. When military bioscientist Capt. Warren’s hidden research installation gets attacked, he joins forces with armored assault Sgt. Von Radach. They become entangled in a deadly fight to stop the theft of classified military secrets by a lethal female villain. Her devious plans to use enemy cyborgs posing as humans and altering military personnel’s neural implants to accept her commands have every chance of succeeding. Unless…Capt. Warren and Sgt. Von Radach can end her first.

A lethal orbital defense platform.
A squad of green Marines.
A silent alien killer.
WHO DIES NEXT?
2441AD. A quarantine platform in the Rakasa system goes quiet and a squad of freshly minted Marines are sent to investigate. The blood soon flows, but there is one Marine who has the bravery and cunning to take on even the most lethal hidden foe. Set 125 years before the events on Tranquility that sparked the creation of the Human Legion, ‘The Demons of Kor-Lir’ is a standalone novella that is also an introduction to the Sleeping Legion novels.

Isaac and Aaron are nothing if not survivors. Their homeworld lost and their people scattered, all they have left is each other. Then, in the Far Outworlds, they find a dead colony with a beautiful young woman frozen in cryostasis. She is also a survivor—and she needs their help.

Arek Lancer, independent freight hauler, just wants to pick up a cargo from the port of Buhin. But when an old “friend” from his military days forces Lancer to take on a cargo to deliver to a criminal organization, he must figure a way out of the mess before either side kills him.

Clunk’s grateful when his boss sends him off for a refit, because old robots are usually junke

Well, before the refit he must help a freelancer pick up some cargo. Landing in a deserted field under cover of darkness, avoiding customs ships, orbital lasers and trigger-happy warships along the way, is not a problem for Clunk. The freelance pilot is a much bigger challenge, because Hal Spacejock is obstinate, over-confident, and woefully under-skilled, and yet he refuses to cede control of his ship to a mere robot.
Can the two of them sort out their differences and deliver the cargo, or will they still be wrestling over the controls when the deadline expires?

This meme was started by Books by Proxy, whose fabulous idea was to compare UK and US book covers and decide which is we prefer. This meme is currently being nurtured by Lynn’s Book Blog and the subject this week featuring on any of our covers is a WOLF. I’ve selected Wolf Brother – Book 1 of the Chronicles of Ancient Darkness series by Michelle Paver. 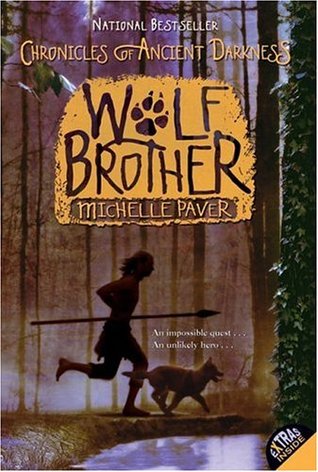 This edition was produced by HarperTrophy in February 2006. The font and pawprint for the O is eye-catching and attractive, but my big problem with this cover is that it simply hasn’t been designed for the digital era and is far too dark. The figures don’t stand out sufficiently and in thumbnail, they simply disappear. Given it is for young readers, I’m not sure why this is such a gloomy offering.

Published in May 2005 by Orion Children’s Books, this cover is far more effective in thumbnail. The line drawing of the boy and the wolf glows out of the terracotta cover and once again, I love the uneven font. Personally, I would have appreciated just a bit more going on – it’s very stark for children, who are generally used to covers with far more detail.

This edition, published by Orion in 2011 is beautiful. I love the colour of the cover and the way the light has been handled. The howling wolf is fabulous, while the figure of Torak, backlit by the rising sun gives a sense of his vulnerability. Once again, the font is effective and quirky. This is my favourite cover.

This German edition, produced by cbj in January 2014 is another strong contender. I love the depiction of the ferocious bear demon in the sky, while Torak and the wolf are running together in the foreground. If I have a niggle, it’s that the figure of the boy is just a bit wooden and doesn’t have the emotion of the previous image. I also think the title font should have been edged or embossed to make it stand out more from the detailing.

This French edition, published in April 2005 by Hachette has plenty going on. It is also beautifully drawn. I love the face of this wolf and the hunched figure of Torak on the rock ledge. The title font has also been produced with care and skill – it looks really effective, even against all the artwork. But… I think there is a tad too much going on. What do you think? Do you agree with me?