I’d heard a lot about this series and so was delighted when I spotted this one on Netgalley. 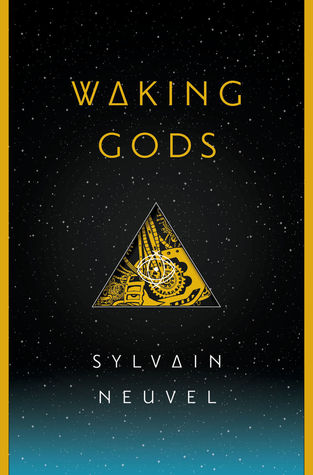 As a child, Rose Franklin made an astonishing discovery: a giant metallic hand, buried deep within the earth. As an adult, she’s dedicated her brilliant scientific career to solving the mystery that began that fateful day: Why was a titanic robot of unknown origin buried in pieces around the world? Years of investigation have produced intriguing answers—and even more perplexing questions. But the truth is closer than ever before when a second robot, more massive than the first, materializes and lashes out with deadly force. Now humankind faces a nightmare invasion scenario made real, as more colossal machines touch down across the globe. But Rose and her team at the Earth Defense Corps refuse to surrender. They can turn the tide if they can unlock the last secrets of an advanced alien technology. The greatest weapon humanity wields is knowledge in a do-or-die battle to inherit the Earth . . . and maybe even the stars.

I make a regular habit of crashing series midway through and most of the time it is absolutely fine. However, I have a real sense that I would have enjoyed this book a whole lot more if I had read Sleeping Giants first as there didn’t seem to be a particular moment for the reader to bond with the main protagonists before the action all kicked off again. There was certainly plenty going on – those huge robots were suitably mysterious and chilling.

As I hadn’t read the first book, it took me a while to work out what exactly what happening with Themis and why only a very select number of people could control it. I was certainly startled when one of the main characters died – but there was a fair amount of mayhem and destruction, which was well depicted. It’s a tricky proposition to portray widespread annihilation and get the readers to really care for the thousands who have died, but this was one of most successful parts of this book. I was genuinely shocked at the sudden outbreak of violence and the extent of it. The deaths were also very well handled.

However, I didn’t really care as much for the main characters and their fates as I felt that I should and the narrative told in the form of recorded files meant that it read in places far more like a play. I suspect that this book is brilliant in audio form – but I missed the layers and nuances you get with characters’ gestures, given they were little more than talking heads throughout. That said, there was never any risk of my not completing it – the action was far too engrossing. While I obtained the arc of Waking Gods from the publisher via NetGalley, this has in no way influenced my unbiased review.
7/10

My debut novel Running Out of Space is featured today by those nice folks at the Daily Waffle, complete with an excerpt from the book.