I have really enjoyed the previous books in this superior werewolf series – see my reviews of Silver, Tarnished and Reflected – and was delighted to see this one on my Kindle, evidently bought as a gift from Himself.

When an envoy arrives from the secretive Russian werewolf pack, Roanoke alphas Silver and Andrew 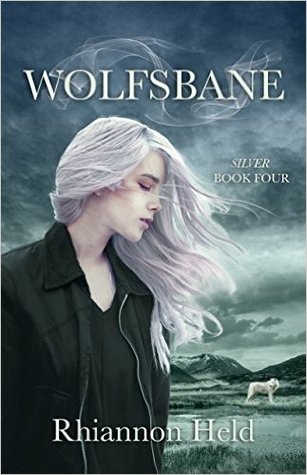 Dare are instantly suspicious. Tatiana claims she has been sent to locate an heirloom, lost by immigrants centuries ago, but she and the alphas both suspect that Russia fears the strength of the newly-united, continent-spanning Roanoke pack.

This is an interesting book. Andrew and Silver are absolutely correct to be concerned about this envoy as they fall prey to an unusual form of attack and while they lie comatose, fighting for their lives, they find themselves in vivid dreams or visions where an alternative timeline prevails.

It isn’t necessarily the same timeline and there is some confusion/crossover where Andrew, in particular, knows that he isn’t really a brutalised enforcer at the mercy of an inept alpha he actually took care of years ago. And that lands him in a shedload of trouble, just at a time when he doesn’t need it. However, it is Silver’s timeline which is probably the most heart-rending. In her alternate timeline, she has escaped the devastating effects of being injected with silver, so she no longer struggles with a paralysed arm or is unable to Change. So you’d think she would be capering for joy – except the consequences for her pack having not been the one hit is catastrophic. She is whole and her family are still alive, but the cost is terrible…

Meanwhile the Russian envoy, who incapacitated these two high-profile alphas, is having to cope with some hard truths of her own. Expecting to be torn to pieces for attacking Andrew and Silver, she is shaken at the response, having been raised so very differently. While I would recommend you read the series in order, this book would make a good entry point with the flashbacks and as we follow Tatiana as she copes with the difference in customs between the Russian and US packs, we learn a fair amount about the politics in this complex, intriguing world that Held has constructed. I was also pleased to meet up with John and Susan again – they are solid favourites of mine, particularly Susan. It’s refreshing to read an urban fantasy werewolf series where the strong characters aren’t necessarily the largest and shaggiest with the sharpest teeth.

Knowing how Held can take a story and produce unexpected twists, the pages flew by as I was engrossed in this story right up to the end. I don’t think this is her best book – the visions/dreams did slightly remove that edge of danger that generally permeates these adventures. However, there was more character development and it was lovely to get back to this enjoyable, complex world. I’m very much looking forward to reading more books in this quality series.
8/10