This meme was started by Books by Proxy, whose fabulous idea was to compare UK and US book covers and decide which is we prefer. This meme is currently being nurtured by Lynn’s Book Blog and the subject this week featuring on any of our covers is CHRISTMAS, so I’ve selected Hogfather – Book 20 of the Discworld series by the irreplaceable Terry Pratchett. The first time I read this book, I was crying with laughter over the scene in the toy department…

This version was released in October 2002 by Corgi and I get the impression that the cover designer was told that this book featured Death stepping into the role of the Hogfather. He chose to focus on the Death part… All this gloom and blackness gives this cover a sense of horror – and it’s nothing of the sort. While the story is violent in places and features the most psychotic killer Pratchett ever depicts, there is also plenty of mayhem and lots of humour, too. Not that you’d know it from this cover, which I HATE. 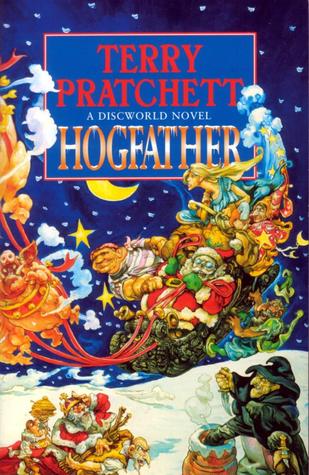 Published in October 2002, also by Corgi, this cover is a huge improvement – mostly because it’s based on the original. In my opinion, it’s even better, because those big, intrusive text boxes are no longer a feature and we get the full benefit of the fabulous artwork. This one is my favourite.

This edition, published by Corgi in June 2013, is another winner – though I’m intrigued to see this one was released in the middle of summer, for some reason… Rightly featuring the pigs, it once more packs a punch with that lovely dark sky in the background and nicely stippled author font. Again, this one is based on the original cover for the book and so the riotous aspect of the story is reflected in the artwork. This one is also my favourite. And no… don’t ask me to choose between the two, because I can’t. 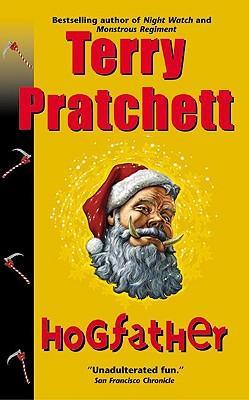 Produced by Harper in September 1999, this one is just boring. While a picture of the Hogfather features on the cover and the title font is pleasingly quirky, that doesn’t really make up for the oh-so plain yellow cover. And no – I personally don’t think the line of scythes is a suitable replacement for the iconic bright, colourful covers that always remind me of Pratchett’s Discworld series.

This French edition, published by Pocket is the only original cover that comes close to the humorous mayhem that represents the series. I love the way Death emerges from the chimney, with the children looking on in fascination. Susan is beautifully portrayed and I love the orange glow that suffuses this cover – so appropriate for the time of year. If I didn’t have such fond memories of the previous covers, which I’m sure is affecting my choices, this one would have been a real contender. Which one is your favourite?