In a smart marketing move, Orbit has rolled up this series into one omnibus edition. So, given that I don’t particularly warm to breeze-block sized fantasy books and only picked it up on the firm recommendation of Himself, was it worth hefting it off my To Read pile?

Griffins and mages, blood and kings. The Griffin Mage trilogy is a tale of fury and majesty – a tale of consequences in love, in war, and in death. Griffins are not mere animals: they are creatures born of a hot fierce magic and they bring their desert with them in the wind from their wings. But creatures of fire are the natural enemies of creatures of earth. The griffins strike fear and awe into the hearts of the ordinary people of Feierabiand, and inspire hatred amongst the powerful ice mages of Casmantium. And when hatred boils over – and kings get hungry for power – a war will be waged between earth and fire that will threaten to tear their whole world apart.

So… classic epic fantasy with big stakes, nasty monsters and plucky but under-rated heroines to save the day. Erm. No, not really. Neumeier is far more nuanced than that. Her griffins are not just scary beasts capable of razing human lands by covering their territory with blazing deserts – they are magnificently beautiful and reacting to a very real threat. The first book, Lord of the Changing Winds is all about the griffins and how they are being used in a wider political plot by an ambitious king. The focus of the story is very much about the way the griffins have been manoeuvred into fighting for their existence – and Kes, the small, quiet peasant girl who gets sucked right into the middle of the whole mess.

I very much liked how Neumeier handled this protagonist – she doesn’t suddenly become markedly different or a great deal more confident once she is shunted right into the middle of action. And there is a constant acknowledgement of the high cost – poignantly, not that Kes is fully aware of that – it is those who care for her that realise just what she will lose. After all, she’s barely a teenager and not educated or sophisticated – facts that Neumeier doesn’t gloss. 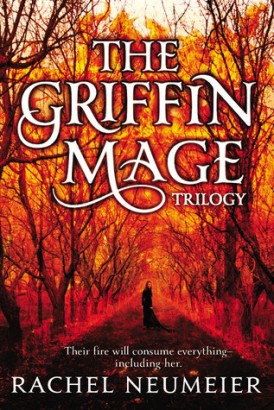 The next book, Land of the Burning Sands has moved the story onward and this time the focus has shifted away from the griffins and more on the threat they are posing to the surrounding countries. And how the rulers and their mages are going to face up to such a determined attack on humankind. The main protagonist is a convicted murderer, Gereint, who is enslaved and bound by a geas to obey his owner – no matter what he is commanded to do… He flees into the desert created by the griffins in an attempt to escape from the cruel, depraved lord who owns him – and his subsequent adventures have him caught up in the desperate efforts to stop the griffins overrunning humanity and covering the earth with their deserts. It is fascinating to view Kes, the griffins’ fire mage, through the lens of those trying to oppose her. And it is a joy to read a series where the threat isn’t posed by some pantomime villain glorying in his wickedness, but by an angry powerful group who are still nursing a sense of grievance for past wrongs inflicted upon them.

The third book, Law of the Broken Earth, again shifts the time forward with a different set of protagonists. While reading the books in order gives the reader the full impact of the author’s intentions regarding the way each book builds on the previous one, I do get the sense that if you picked up one of these and read it as a standalone, it would still work. While you would only be getting a slice of the world, there is no sense that you would spend half the book floundering to catch up with what had gone before – a major consideration.

Mienthe, an heiress who has lived a sheltered life tucked away in the Delta Land, finds herself pitchforked into the middle of a major crisis when a spy escaping from a neighbouring country seeks refuge in their manor house. While those pursuing him don’t give up, enraged at what he has stolen… While Mienthe’s older, capable cousin and the King are engrossed at the other end of the country with the growing crisis around the griffins, she finds herself struggling to cope with attacks, both magical and actual as the Delta is invaded.

The griffins’ activities run like a spine throughout the trilogy and at times we revisit Kes, the first protagonist in the series. But by this time, she is completely altered such that the humans who try to interact with her rarely succeed. There is a sense of sadness at what has happened to her, despite her clear enjoyment of the Land of Fire, which I appreciated. It is always refreshing to encounter a magical system where the consequences are long-lasting and not necessarily good.

So, does the ending of the final book in this engaging trilogy satisfactorily tie up all the loose ends and give us an adequate conclusion for the considerable amount of time the reader has invested in this brick of a book? Absolutely. I particularly appreciated the explanation for the imbalance between the forces of Earth and Fire that caused the initial enmity between the griffins and humanity. As you may have gathered, I really enjoyed this book – and will be looking out for more of Neumeier’s work. A writer capable of such intelligently, layered storytelling is worth reading.
9/10