I have read two of the previous four books in this entertaining series by prolific author, Simon R. Green – read my review of Death Shall Come – and thoroughly enjoyed them. So I immediately jumped at the opportunity to read this latest offering. 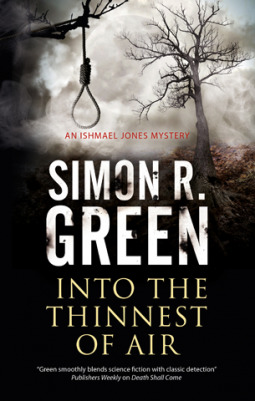 Ishmael Jones and his partner Penny are attending the re-opening of Tyrone’s Castle, an ancient Cornish inn originally built by smugglers. Over dinner that night, the guests entertain one another with ghost stories inspired by local legends and superstitions. But it would appear that the curse of Tyrone’s Castle has struck for real when one of their number disappears into thin air. And then another . . .

This entertaining locked-room mystery takes place in a creepy Cornish Castle with a long-standing curse hanging over it. After winning a substantial sum on the lottery, the couple hosting this particular evening have transformed it into an inn with a fine-dining restaurant and Penny, Ishmael’s partner, has been sent an invitation. They seem particularly keen for her to attend, although they were really friends of her father. So she feels obligated to go along and is sure that Ishmael will be equally welcome. However as he walks through the door, he realises that not only were they not expecting anyone to accompany Penny, they are not remotely pleased to see him.

Ishmael’s enhanced senses tell him there is something not quite right about this evening, so instead of a weekend getaway where they could pretend to be an ordinary couple, they find themselves pitchforked into the middle of yet another bloody adventure. Once again, Green’s snappy writing and effective scene setting swept me up into the story and had me turning the pages until it was all over. I really enjoy Ishmael as a character. While he is supposedly on the side of the angels, there is a darker side to him and I liked the fact that at one point in this story, he simply lost his temper and took it out on his surroundings.

One of Green’s strengths is his ability to give us plenty of back story and motive for all of the suspects that Ishmael and Penny, who are an interesting mix of characters and I enjoyed the fact that Green doesn’t necessarily play them to type – for instance, the vicar is far weaker than his wife. As for the denouement, while I didn’t see it coming, it had crossed my mind before I dismissed it a couple of times during the book. However, in this story, it is as much about the why, as it is the how, which I found reasonably convincing.

This one certainly managed to make a train journey to London and back far more entertaining and is recommended for fans of murder mysteries with a paranormal twist. While I obtained an arc of The Thinnest of Air from Netgalley, the opinions I have expressed are unbiased and my own.
8/10