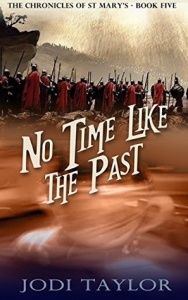 sausages were being purchased with enthusiasm, especially after sampling thimblefuls of assorted murky and very sticky drinks, which invariably resulted in a sharp intake of breath, a momentary loss of vision, and utterances of ‘Wow! I’ll definitely have a bottle of that! No, make it two!’ People were staggering away with slightly less control over their limbs than they had previously enjoyed.

BLURB: St Mary’s has been rebuilt and it’s business as usual for the History department.
But first, there’s the little matter of a seventeenth-century ghost that only Mr Markham can see. Not to mention the minor inconvenience of being trapped in the Great Fire of London…and an unfortunately-timed comfort break at Thermopylae leaving the fate of the western world hanging in the balance.

I have had a very hectic week, followed by an intense week-end at the marvellous 20 Books 2018 Conference at Runneymede. So I wanted something both funny and action-packed to take me to somewhere completely different – and I don’t know anyone else who does it better than Jodi Taylor’s wonderful time travelling adventure series, which can have me laughing aloud and blinking back tears in the course of a handful of pages. Wonderful stuff!