Like many other science fiction fans, I was blown away by the Mars series – and also very much enjoyed Antarctica, so it was a no-brainer that I needed to track down 2312.

The year is 2312. Scientific and technological advances have opened gateways to an extraordinary future. Earth is no longer humanity’s only home; new habitats have been created throughout the solar system on moons, planets and in between. But in this year, 2312, a sequence of events will force humanity to confront its past, its present and its future. 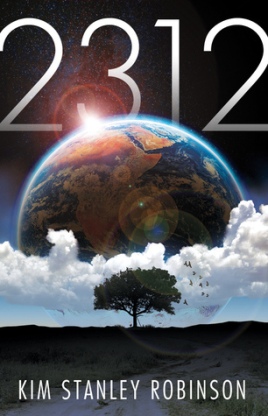 In essence, this brick of a book follows the fortunes of Swan after her grandmother unexpectedly dies and her actual adventures would easily fill a book only half the size. But this novel isn’t just about the fortunes of one character, it is also a detailed evocation of a future where humanity has spread across the solar system. Not only are we now living on Mars, Venus and even Mercury – I love the wheeled city, Terminator, running on rails so as to stay out of the lethally scorching sunlight, which sears the planet surface every daybreak – humans also inhabit the interior of hollowed asteroids and perch in tented cities on the surfaces of moons circling Saturn. While Earth still struggles to recover from the disastrous sea level rise, spacers send back food and resources.

As life expectancy becomes ever longer and the basic template of humanity is tweaked – including their sexuality – and altered to cope with innately hostile conditions, the book examines the familiar theme of what exactly defines human beings.

This is a major theme running through the book, as the mobile AIs, known as qubes appear to have suddenly altered – and a knot of influential humans are beginning to meet off-grid, concerned to communicate with each other face to face, rather than using quantum computers to link up virtually.

Running alongside the descriptions of the different worlds, Swan’s story arc are also chapters providing lists, and other chapters of extracts, discussing subjects as diverse as the periodification of history (we’re living through The Dithering, by the way…), instructions on how to create terraria from a hollowed asteroid and a philosophical discussion on the impact of the constant changes of humankind. So – do they work, interspersed in amongst the actual storyline? Honestly, I think the answer has to be – yes and no. Some are punchy, enjoyable and certainly successfully add an interesting dimension to the book, while others are so oblique and abstract (many of the lists fall in this category, in my opinion) that I found myself skimming through them.

But it is refreshing to see a novelist of Robinson’s fame continue to push the envelope of what constitutes a hard science fiction story – which as a genre has always paid a great deal of attention to the world-building and the technology. Because he has put those aspects right up there alongside his fairly straightforward story and what creates the gravitas in this book are those elements interweaving in amongst the narrative arc. Which has created a thickly textured world where pockets of humanity are splintering off into their own, often creating very introverted societies.

Unlike the modern taste for keeping the pace clipping along at a brisk trot by using plenty of tension and using character-led action, Robinson insists on slowing everything right back down again, after an action scene, by the inclusion of another chapter of extracts and/or lists. It took me a while to get used to the rhythm of the book, but once I did, I was surprised how tolerant I became of these interruptions. Of course if they were badly written, poorly reasoned or lacking in originality and invention I probably would have lost patience with them.

Overall, I think this sprawling book works – although I wasn’t completely convinced by the ending. But the lapses in the storyline; occasional holes in the characterisation or sheer oddity of the lists can all be forgiven when set against the hugely ambitious scope of what Robinson is trying to achieve. And that fact that he succeeds more than he fails. If you haven’t given it a go and your taste runs to intriguing, complicated worlds and musing on where we are headed as a species, then track this book down. You won’t have read anything quite like it – I guarantee it.
8/10