This meme was started by Books by Proxy, whose fabulous idea was to compare UK and US book covers and decide which is we prefer. This meme is being nurtured by Lynn’s Book Blog and this week we are featuring WINTER COVERS. I’ve selected Antarctica by Kim Stanley Robinson. 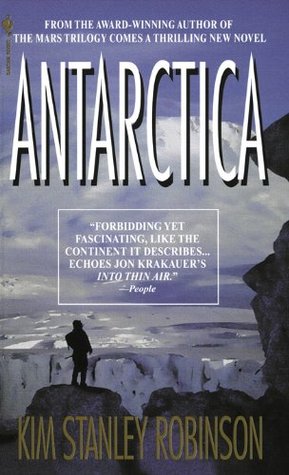 This edition was produced by Bantam in July 1999. First the good news. I like the eye-catching font, which works well in giving a clue as to the genre. But other than that, I think the artwork is dreary with a muddy colour palette – not what I associate with a snowscape. And I thoroughly dislike the chatty textbox in the middle of the cover – why isn’t that on the back cover, where it belongs? Overall, this is a lacklustre, charmless effort – this interesting, memorable book deserves better.

Published in September 1999 by Voyager, this is a definite improvement on the previous effort. Again, I really like the punchy font with the 3-D effect and the artwork is far more satisfactory than the previous effort, clearly indicating the futuristic timescale. This one is so nearly my favourite… 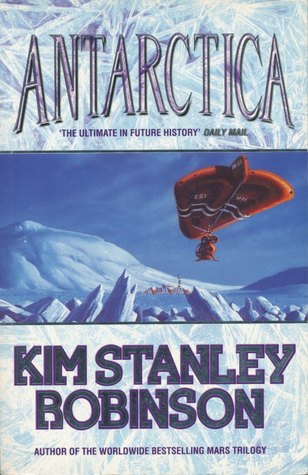 This edition, published by Voyager, is my favourite. That might have something to do with the fact that this is the cover of the edition that I’d read and thoroughly enjoyed. It’s something of a surprise that I like this one so much, given my general dislike of textboxes and most of this cover features the two chunky textboxes, with the artwork almost an afterthought. However, I really like the frosted effect on the textboxes that give this cover a bright, icy feel missing from most of the offerings. 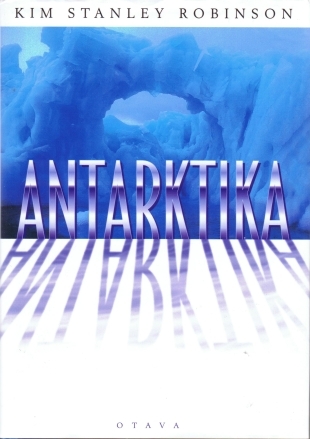 This Finnish edition, produced by Otava, also has a nifty title font. I really like the way it is reflected in the icy foreground, though I am underwhelmed by the author font which looks odd tucked away in a thin strip across the top of the cover. The colours are far more appropriate for a snowscape – that cold blue and the white foreground works well.

This French edition, published by Presses de la Cité, is a rather lack-lustre affair. The picture of a random series of ice floes, with a font slapped across the front, looks like someone’s effort with Adobe Photoshop, I think. Which is your favourite?