This meme was started by Books by Proxy, whose fabulous idea was to compare UK and US book covers and decide which is we prefer. This meme is being nurtured by Lynn’s Book Blog and this week we are featuring CLASSIC SCI FI covers.

I’ve attempted to find an older science fiction book to feature that I particularly enjoyed – and discovered that I generally don’t read vintage stories, these days. So I finally settled upon To Say Nothing of the Dog – Book 2 of the Oxford Time Travel series by Connie Willis, one of the most magnificently funny and joyful books I’ve read in the past few years – see my review. Which isn’t a surprise when a lot of the inspiration of it comes from the wonderfully ageless Three Men in a Boat by Jerome K. Jerome.

This edition was produced by Spectra in January 1998. It’s busy and the scenes do relate directly to the content – but that’s all I can say in praise of it. You’d never guess that this is a humorous book with a strong Victorian inspiration, looking at this cover. And given that a cover should also give a sense of the overall tone, then it is doesn’t hit the mark.

Published in May 2013 by Gollanczs, this cover again successfully tackles much of the subject matter within the book. But that dark blue and distorted view of Coventry Cathedral evokes a sense of dread or foreboding – where is the glorious lazing along the river? The sheer joy of the farcical plot and the wonderfully eccentric characters? Nope, not getting a HINT of it here…

This edition, published by J’ai Lu in May 2000, has taken us onto the water. But while the sepia tones and the stiffly posed characters on the riverbank do give me a strong sense of the Victorian era – I’m expecting either a man-eating eel to suddenly erupt from the water, or some ghostly menace to creep from the head of one of those spooky-looking characters. Where is the joy and madcap chaos and sheer cleverness of this wonderful book? I know, I know… I’m sounding like a cracked record!

This edition, produced by Allen & Unwin in February 2012 has at least effectively evoked the correct tone – I don’t get the sense that an axe murderer is about to jump out from behind the bridge. And we also have the dog of the title. BUT anyone who has spent any time on this site will know that I LOATHE textboxes and here is a ghastly example slap bang in the middle of the cover.

This Japanese edition, published by Hayakawa Shobō in April 2004, FINALLY hits the mark. Here we have the main characters punting down the river. I love the fact that the design has been slightly tweaked so there is an eastern flavour to it. But shame on alll those UK publishers who dismally failed to evoke the zany Englishness that Willis, a remarkably talented American author, so wonderfully wrote. Needless to say – this is my favourite! Have you read the book? Which cover do you prefer?

This meme was started by Books by Proxy, whose fabulous idea was to compare UK and US book covers and decide which is we prefer. This meme is being nurtured by Lynn’s Book Blog and this week, we are featuring covers with the word MOON in the title. I’ve selected The Moon is a Harsh Mistress by Robert Heinlein.

This cover was produced by Hodder & Stoughton in March 2005 and caught my eye because of the funky author font which really pops. I’m a bit surprised at the very plain treatment of the title font by comparison, given what a famous book this is, as well as being a bit disappointment. Other than that, I think the spaceships/prison cells are a bit generic. I would have liked to have seen at least a nod to the 1960s within the cover design out of respect for this book’s longevity.

Published in December 2008 by Gollancz, this SF Masterworks edition is rather disappointing. The title and cover fonts are utterly plain and underwhelming, to the extent that in thumbnail, they completely disappear. While the cover design is very generic – that could be any old planetary satellite, with any old spaceship approaching. Given how used we are to iconic moonscapes after 1966, I feel the designers could have done a lot better.

This edition, published in September 1968 by Berkley Medallion, is a bit more like it! That setting is recognisably the moon, with one of the railguns that Heinlein featured in this revolutionary story. While the fonts are rather boring, at least they are easily readable when this cover is in thumbnail. And the design and feel of the cover is of the period when this ground-breaking book was first published.

Published by Berkley in May 1981, this is my favourite. I love the period feel, the lunar landscape and the drama of the spacecraft crashing in the foreground. I also love the treatment of the author font – it looks fabulous. And the icing on the cake is that we also have Earth hanging in the sky. I only wish the book’s title had been given just a bit more care and attention. That said, I think this cover really jumps out in comparison to the previous offerings and would certainly tempt me to reach for it.

This edition, published in 1998 by New English Library is so nearly a contender. I love the remains of the spacesuit, with an arm still clutching a gun in the foreground which creates a real sense of drama. And it is also refreshing to see the title actually appearing in colour. However what stops this one from being my favourite is the appearance of that huge planet in the sky – really?? Who towed the Moon so much closer to Earth – or have we now imported another planet into the Solar System in the near future? This sloppy mistake is a dealbreaker for me. But which one do you like best?

This meme was started by Books by Proxy, whose fabulous idea was to compare UK and US book covers and decide which is we prefer. This meme is being nurtured by Lynn’s Book Blog and this week we are featuring VINTAGE SCI FI covers. I’ve selected Have Space Suit – Will Travel by Robert Heinlein. 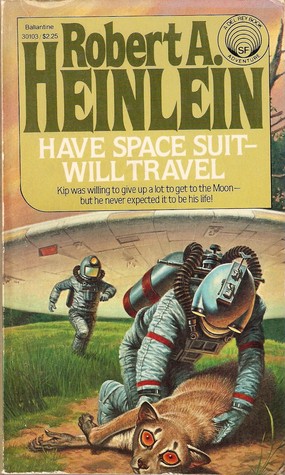 This edition was produced by Del Rey Books in May 1985 and is purposely recreating a cover used on a much earlier edition – this one was originally published in 1958. I really like this one. Yes… I know it has a dreadful, intrusive textbox, but at least there is the excuse that back in those days, they were still in vogue. I love detailed artwork – that expression of grumpy surprise on the poor alien beastie is hilarious. 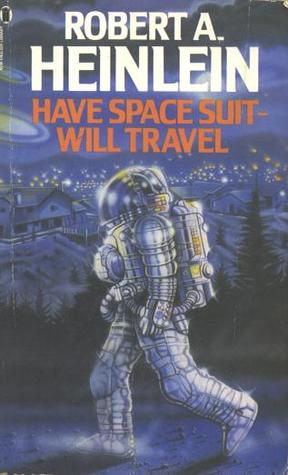 Published in July 1987 by New English Library, this one is my favourite. I love the 1950s space suit and the way the light glimmers off it. In fact the artwork on this one is outstanding, with the small town tucked up for the night adding to the sense of place – and not a nasty, intrusive textbox to be seen! 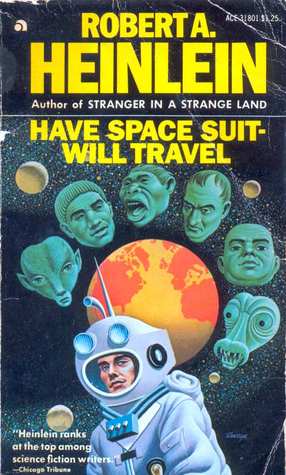 This edition, published by Ace in June 1975, is rather weird and quirky. Those odd faces surrounding the worried-looking young man in the jaunty spacesuit look comedic. As far as I can gather, this one is a very early YA space opera adventure, though I’m unsure if it is supposed to be particularly funny. 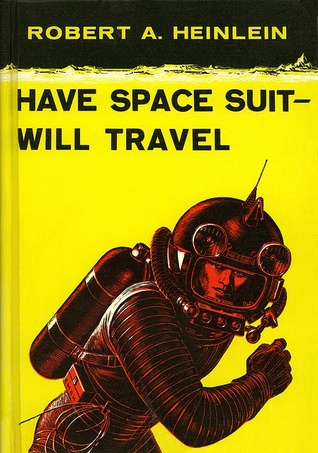 This edition, produced by Charles Scribner’s Sons in 1958, certainly packs a visual punch. That vivid yellow background really draws the eye and works very well with the brilliant red figure – and I’m impressed no one added anything else. I was surprised to learn this was one of the original covers – it feels far more modern with the funky colours and stripped-back design – again, no textbox to clutter and disfigure. 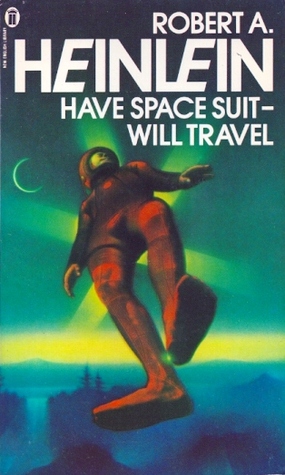 This edition, published by New English Library in June 1985, is another strong offering. I love that beautiful, multi-coloured backdrop, while that foreshortened figure is seen from below – a really unusual viewpoint. This attractive and original cover manages to be stylish and different, yet still keeps within the genre. This one is definitely a contender. Which is your favourite?