term’s Creative Writing course entitled, What’s the Time and is it Raining? Setting and why it Matters. I’ve also started my major rewrite of Miranda’s Tempest again as I’m beginning to turn into the witchbitch from Hell due to not writing creatively. The signs are all there – difficulty sleeping because my brain is itching… short-tempered… suddenly finding myself wanting to cry inappropriately – at a dance on Strictly for instance… So I had better start writing something more than blog articles and teaching notes before Himself decides to spend Christmas sorting out the loft.

On Friday, my granddaughter Frances turned thirteen. She has had her hair cut into a bob and donated her thick, curly, waist-length hair to the Little Princess Trust which makes wigs from donated hair for children who have lost their hair with cancer treatment. She looks beautiful, now taller than me and turning into a feisty teen full of opinions, which is brilliant. We went for a meal at The Dragon in Rustington with her parents and my sister to celebrate, then took the grandchildren home with us. Yesterday they helped us decorate the house for Christmas – we haven’t yet quite finished as all our lights seem to have disappeared, as we apparently put them a very safe place last year. Or they have been transported into another dimension by a being that needed lights, but not baubles, a tree, nativity scene and yards and yards of tinsel…
Today is the Wrap Party to celebrate the end of the filming with the cast and technical crew of Tim’s film Hoodwinked 3. Frances and I will be attending and we’re really looking forward to it.

The Curious Affair of the Witch at Wayside Cross – Book 2 of the Curious Affair series by Lisa Tuttle
“Witch!” cries the young man after stumbling unexpectedly into the London address of the consulting-

detective partnership of Mr. Jasper Jesperson and Miss Lane. He makes the startling accusation while pointing toward Miss Lane . . . then he drops dead. Thus begins the strangest case yet to land—quite literally—on the doorstep of Jesperson and Lane.

According to the coroner, Charles Manning died of a heart attack—despite being in perfect health. Could he have been struck down by a witch’s spell? The late Mr. Manning’s address book leads Jesperson and Lane to the shrieking pits of Aylmerton, an ancient archaeological site reputed to be haunted by a vengeful ghost. There they sift through the local characters, each more suspicious than the last: Manning’s associate, Felix Ott, an English folklore enthusiast; Reverend Ringer, a fierce opponent of superstition; and the Bulstrode sisters, a trio of beauties with a reputation for witchcraft. But when an innocent child goes missing, suddenly Jesperson and Lane aren’t merely trying to solve one murder—they’re racing to prevent another.
I couldn’t put down this well-written, engrossing Victorian mystery with a twist of fantasy and will be hunting down the first book in this series in the new year.

The discovery of the partially-clothed body of a teenage girl in the heart of Bristol’s red light district indicates a tragic yet familiar scenario. But this marks the start of a baffling murder investigation where nothing is as it first appears. Fourteen-year-old Melanie Cooke told her mother she was visiting a school friend. Who was she really going to meet? Detective Inspector David Vogel is led towards three very different principal protagonists, each of whom grows increasingly chilling. But are they what they seem? And is any one of them capable of murder?
This twisty psychological thriller was a real page-turner and the denouement was a complete surprise – I’ll be remembering this one for a while.

Bound – Book 8 of the Alex Verus series by Benedict Jacka

Alex Verus can see the future. But he never thought he’d see this day. Manoeuvred by forces beyond his control, the probability mage has made a terrible choice: he’s agreed to work for his old master once more. Richard Drakh, the sadistic dark mage Alex escaped as an apprentice, has him in his clutches again. And this time, he won’t let go so easily.
Another cracking read about this well-written prescient mage, whose life just doesn’t get any easier…

The Earth is cold, dead and divided. The rich hide away from reality while the rest will do anything to survive. Humanity have only one hope: reaching a habitable planet. But getting there means travelling in large numbers through alien-held space, something that’s politically nearly impossible. Yet for some, fighting their way through space is just a way of life . . . Jinnifer Blue is a rich girl on the run. An expert pilot, she apprehends criminals on behalf of the government and keeps her illegal genetic modifications a closely guarded secret. But when a particularly dangerous job goes south, leaving her stranded on a prison ship with one of the most ruthless criminals in the galaxy, Jinn realises that the rich and the powerful are hiding more than she’d ever guessed. Now she must decide if she can trust her co-prisoner – because once they discover what the prison ship is hiding, she definitely can’t trust anyone else . . .
I really enjoyed this entertaining space opera. Jinn is an engaging protagonist with some hard options ahead of her – along with the rest of humanity – and I’ll be keeping an eye out for the sequel as I want to know what happens next.

8 Years Ago Today https://thetattooedbookgeek.wordpress.com/2017/12/02/8-years-ago-today/ Bloggers occasionally write about things that are very personal – and when they are passionate and effective with words, the result can be humbling and awesome…

The Stag and the Dragon II https://inesemjphotography.com/2017/12/02/the-stag-and-the-dragon-ii/ Now we are deep into winter, the magic of a beautifully crafted photographic tour is even more appreciated.

#Bookreview: A Ragbag of Riches by James Chilton https://rathertoofondofbooks.com/2017/12/01/bookreview-a-ragbag-of-riches-by-james-chilton/ With Christmas around the corner, I’m on the lookout for books that would delight the word nerd in your life – and this looks like a real gem…

A Story of Snow https://zenandtheartoftightropewalking.wordpress.com/2017/12/01/a-story-of-snow/ Articles by this talented author are always worth reading – and this one is no exception.

Weekly Writer Wisdom: Ursula K. Le Guin’s National Book Award Acceptance Speech https://saraletourneauwriter.com/2017/11/28/weekly-writer-wisdom-ursula-le-guin/ These wonderful words from one of the most famous authors in the SFF community are worth listening to…

Thank you very much for taking the time and trouble to visit, like and comment on my site and may you have a great week.

My attention was snagged by this title and Lisa Tuttle is an author who is been on my radar for a while, so I requested it.

“Witch!” cries the young man after stumbling unexpectedly into the London address of the consulting- 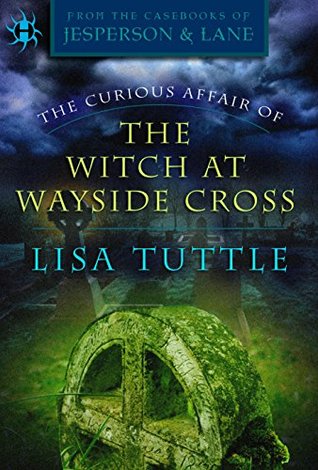 detective partnership of Mr. Jasper Jesperson and Miss Lane. He makes the startling accusation while pointing toward Miss Lane . . . then he drops dead. Thus begins the strangest case yet to land—quite literally—on the doorstep of Jesperson and Lane. According to the coroner, Charles Manning died of a heart attack—despite being in perfect health. Could he have been struck down by a witch’s spell? The late Mr. Manning’s address book leads Jesperson and Lane to the shrieking pits of Aylmerton, an ancient archaeological site reputed to be haunted by a vengeful ghost. There they sift through the local characters, each more suspicious than the last: Manning’s associate, Felix Ott, an English folklore enthusiast; Reverend Ringer, a fierce opponent of superstition; and the Bulstrode sisters, a trio of beauties with a reputation for witchcraft. But when an innocent child goes missing, suddenly Jesperson and Lane aren’t merely trying to solve one murder—they’re racing to prevent another.

I haven’t read the first book in this series, but while I have clearly missed a slice of the adventure, that didn’t hamper my understanding or enjoyment of this story. Tuttle doesn’t hang about – she tips us straight into the case which I appreciated. While this series has been compared with the Sherlock Holmes adventures, I don’t think that Miss Lane, the narrator of this case, is all that much like John Watson. She isn’t overly gushing about Jasper Jesperson’s detecting skills, for starters – indeed, there are times when she is quite sharp about him, which I enjoyed.

The other aspect that I hadn’t expected and very much liked – while both Jesperson and Lane are middle-class and reasonably comfortably off, that doesn’t prevent Tuttle from lifting the façade on apparent Victorian respectability by depicting a young serving girl’s plight after suffering a rape. The detective duo also uncover a shocking lack of respect towards women who have the temerity to refuse or thwart a couple of apparently eligible men, who portray themselves as perfectly reasonable, educated gentlemen. Miss Lane isn’t particularly happy about the state of affairs, but isn’t overly surprised. What it reinforced for me is how much women were simply not regarded as on a par with men. Not only did they not have the same protection in law, they were not felt to be capable of the same understanding or intellect as a man – so when a woman demonstrated any independence of spirit, she frequently incurred anger at her temerity – how dare she defy him!

That said, I don’t want you to go away thinking this entertaining, engrossing whodunit is focusing on the gender inequality of the time – it is a mere side issue in this adventure. An adventure full of twists and turns as Lane and Jesperson then find themselves desperately looking for a baby. And the resolution to that puzzle had my jaw dropping…

All in all, I thoroughly enjoyed this one and will definitely be tracking down the first instalment in this series. Recommended for anyone who enjoys their historical crime series with a twist of fantasy.
9/10