Ever a sucker for a cool, creepy cover, this book pleaded with me to be plucked from the bookshop shelving and I caved in – sad addict that I am. Then in guilt-ridden disgust with myself (I need another book in the house like I need a flea circus…) I plonked it on the teetering pile by my bedside, where it has resided for most of the year.  Until a few days ago, when the bright sunshine caught its cover. I opened it, idly started reading the first few lines – and was snared… 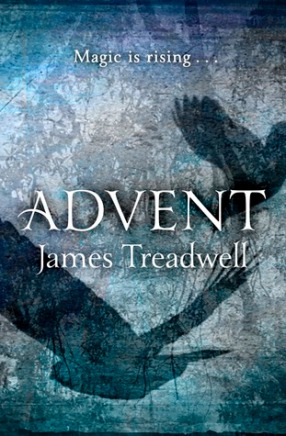 For centuries it has been locked away. Locked away. Lost beneath the sea. Warded from earth, air, water, fire, scrying thought and sigh. Now magic is rising to the world once more. And a boy called Gavin, who thinks only that he is a city kid with parents who hate him, and knows only that he sees things no one else will believe, is boarding a train alone, to Cornwall. Where he steps into a different world…

That’s the blurb – apart from the last sentence, which is my own invention as the original contains a spoiler. I never read back cover blurbs until I’ve finished the book, as they are generally far too prone to release information the author crafted to be revealed to the reader in the context of the story arc, not in a couple of snappy sentences on the cover. And this one is no exception.

I’ve seen this book compared favourably to Susan Cooper, and while such hyped comparisons are often absurd, this time, I was reminded of Cooper’s threat-ridden landscape and sense of tension. Treadwell is a superb writer – the description of the ancient house, Pendurra, is outstanding. The other writer Treadwell reminds me of is Richard Adams – and no, I’m not discussing Watership Down – I’m thinking of his disturbing book The Girl on a Swing. The way Treadwell builds the character of Gavin, beset by visions that no one else will admit are anything other than his wayward attempt to get attention, the richness and quality of the writing and the feeling of shock and dislocation as events slide away into something a whole lot darker, is reminiscent of Adams’ gothic masterpiece. Although, I hasten to add that Advent doesn’t deal with the same subject matter as The Girl on a Swing, as it is intended for a YA market.

It is a hefty read and at no time does Treadwell throw his young readers any sort of ‘you’re only teenagers, so I’ve made it easier for you’ lifebelt, I’m delighted to report. This non-teenager was engrossed with the quality of the storytelling. In addition to Gavin, there are a cast of vivid characters – the most prominent being the power-hungry mage with more than a nod to Doctor Faustus.

While the tension is there from the first page, it takes a while for the action to fully kick off – but when it does, there is plenty of it. Treadwell gives his readers a ringside seat as Gavin attempts to make sense of the world as it lurches into something different, with the resulting mythological creatures including a birdman, an undine/mermaid and a hellhound. There is a sense of magic, so long repressed and hidden away, now bursting out onto a world unused and defenceless against this new force. And I’m fascinated to see where Treadwell takes this story in the next book, Anarchy, which also has a wonderful cover. I’ll be tracking it down, very soon. In the meantime, if you enjoy excellent fantasy without so much as a whiff of vampires, then go hunting for Advent. It’s one of the best fantasy books – YA or otherwise – I’ve read this year.
10/10