I’d read and enjoyed the dark, gothic Revenger – see my review – so was delighted when I spotted this one on the library shelf. I am linking this review to Sci Fi Month 2019.

BLURB: Adrana and Fura Ness have finally been reunited, but both have changed beyond recognition. Once desperate for adventure, now Adrana is haunted by her enslavement on the feared pirate Bosa Sennen’s ship. And rumors of Bosa Sennen’s hidden cache of treasure have ensnared her sister, Fura, 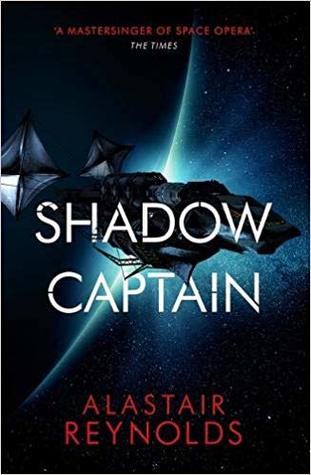 into single-minded obsession. Neither is safe; because the galaxy wants Bosa Sennen dead and they don’t care if she’s already been killed. They’ll happily take whoever is flying her ship.

The lovely thing about spaceship thrillers is that you don’t have to make up complicated reasons why people don’t just wander off for a relaxing walk, or pop out to the shops – everyone is stuck. No one can leave. It gives a lovely claustrophobic sense of desperation when things are going wrong. Like… you’re not sure if you can trust your own sister, anymore. Or maybe several crew members are cracking under the strain. Or maybe – just maybe, you are being shadowed by another ship intent on exacting revenge upon the crazed manwoman who had formerly captained your vessel…

Ditto when you get to port. Again, no one can get very far away. Especially if said port is a space station that has seen far, far better days and is on the brink of financial ruin before it fell into the hands of the wrong sort of people. Another twist of tension-filled mayhem. Bring to it, Reynold’s gift for dark, brooding prose, complicated characters who don’t wear their hearts on their sleeves and I found this one equally unputdownable. It doesn’t have quite the violence level of the first book, which was brutal in parts, but that simmering threat had me on my toes all the same. As well as the knowledge that Reynolds is quite capable of killing off really nice characters that I liked a lot.

The pages more or less turned themselves as I read far into the night to discover what would happen next. And I was pleased to see that the current story arc was satisfactorily wrapped up, while leaving a couple of major plotpoints dangling, ready for the next slice of the adventure.

Shadow Captain – Book 2 of the Revenger series by Alastair Reynolds
p. 269 It was late morning in Port Endless – well into what passed for day in this gloomy place. Perhaps one or two more sky facets had been turned on, or their brightness increased, so that the prevailing illumination was a fraction less sepulchral than the night before. The rains, too, had 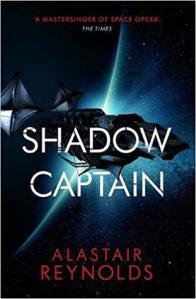 decreased. Parts of the sky were still emitting steam, but the former torrents were being held in moderate check. The streets below were still wet, though, and the puddles and drainage channels and sluices remained waterlogged, embedded in roads and alleys like little chips and slivers of highly reflective material.

BLURB: Adrana and Fura Ness have finally been reunited, but both have changed beyond recognition. Once desperate for adventure, now Adrana is haunted by her enslavement on the feared pirate Bosa Sennen’s ship. And rumors of Bosa Sennen’s hidden cache of treasure have ensnared her sister, Fura, into single-minded obsession.

Neither is safe; because the galaxy wants Bosa Sennen dead and they don’t care if she’s already been killed. They’ll happily take whoever is flying her ship.

I read the first book in the series – see my review of Revenger – which I very much enjoyed. I’m about two-thirds of the way through this tension-filled, twitchy sequel which is an engrossing read. And I’m so, so hoping that the two sisters don’t end up betraying each other… I’m also delighted to see that the third book, Bone Silence, is due out in January.