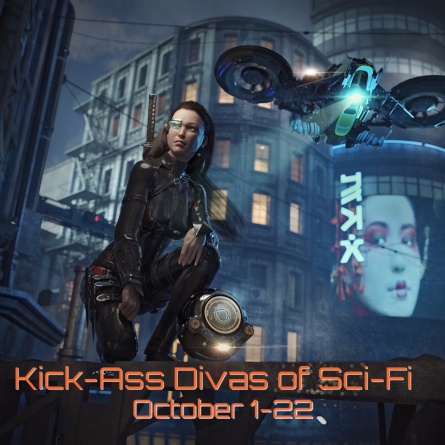 If you are hunting for some gripping sci fi featuring strong heroines in tricky situations, ready for November’s Sci Fi Month I’m taking part in the Kickass Divas in Sci Fi promotion running until 22nd October on Book Funnel. I’ve featured below a handful of books which have caught my eye. Click on the link to check them out in more detail…

Starfall – a Durga System novella by Jessie Kwak
“Have you been treated well here?”
Starla’s hands come up short — she was going to sign something rude, but she’s cuffed to the

table. If these Alliance clowns want answers, they’re going to have to uncuff her to let her talk.
Because they seem to want to ask her plenty: What was her childhood like on Silk Station? Does she understand her parents are wanted? What does she know about OIC terrorists?
But Starla’s not saying a thing until she gets an answer to her own question:
What happened to my parents?
*
Starla Dusai is fifteen, deaf — and being held as an enemy combatant by the Indiran Alliance. Willem Jaantzen is a notorious crime lord about to end a fearsome vendetta — and most probably his life.
When he learns his goddaughter has been captured by the Alliance, he understands he’s her only hope. But saving a girl he barely knows means letting his wife’s murderer walk free. Will Jaantzen be able to put aside his anger before Starla’s time runs out?

Brenna Standing Bear has been given an impossible task by her dying grandfather: convince Absaroka’s Planetary Council to build a fleet to defend against the Bug-Eyes. The problem? The council believes the Bug-Eyes were defeated sixty-eight years ago. Why should they expend precious resources to defend against a non-existent threat?

The Enclave – Book 1 of The Verge series by H.M. Clarke
Federation officer Katherine Kirk, a survivor of the Alliance holding facility at Yunga, is now on

the brink of capturing its infamous commander. But that joy gets ripped away from Kirk when her ship is abruptly pulled from the line and sent to ferry a Federation Ambassador to Junter 3. Once there, Kirk finds herself quickly embroiled in the bitter politics between the New Holland Government and the Val Myrain Refugees claiming asylum.

After an attack on the New Holland Government Center, Kirk and her team hunt the enemy across the planet and discover an Alliance facility hidden deep beneath one of the Val Myrain enclaves. And contains a secret too horrifying to believe possible.

The Community is secure…

The Community is efficient…

Uncover the truth in this thrilling dystopian adventure!