This is an interesting collection of short stories, connected by the recurring theme of survival. Several are linked to the tale of Noah, which starts the book. However, this particular version differs in many ways from the Biblical account, not least because it is told from the viewpoint of one the ark’s passengers. His funny, jaundiced narration of Noah and his family’s behaviour during the Flood immediately raises issues about the truth. He directly challenges our knowledge of the event, claiming that the Biblical version is a cover up, a gloss on the inept, often disgraceful conduct of Noah and his family.
This classic postmodernist stance runs through the book, like the recurring elements surrounding Noah’s tale. The second story, The Visitors, is also set at sea and is also an account of survival, told from the viewpoint of a history lecturer. His role in the unfolding drama, once the ship is boarded by a group of terrorists, becomes increasingly compromised as he attempts to keep himself and his current girlfriend safe.

The next tale, The Wars of Religion, is the weakest one, in my opinion. Barnes indulges in a recreation of medieval court records for 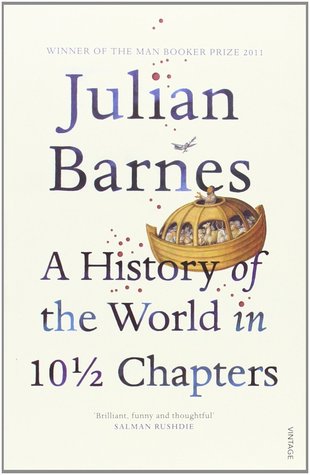 this story. As Barnes notes in the back, this story is based on a true trial set in France. Because it is told through the supposed official records with more than a nod at the fairly convoluted language of the time, the reader doesn’t build a relationship with any of the protagonists and I found myself skimming through it. It could have been effectively told in half the time, and I feel that its inclusion doesn’t really add anything to Barnes’ argument, but has been included because the whole notion caught Barnes’ imagination. However, once we get to the ‘oh my gosh’ moment, there isn’t really anything else to keep this reader’s interest.

The Survivor is a grim tale told in first person point of view by Kath, who attempts to escape the effects of a nuclear conflict and an unhappy relationship by taking a boat to sea with two cats. During her voyage, she becomes delirious and dreams of being kept in a hospital by annoyingly intrusive doctors, who wish to understand the source of her delusions. By the end of the story, we are left to decide for ourselves whether Kath is really at sea with her two well fed cats, or in a hospital room.

The next story, Shipwreck, is another one based on historical fact. In 1816 a small convoy of four vessels set out for Senegal. When one of them, a frigate, ran aground on some reefs, those aboard constructed a raft. However, the whole plan went horribly wrong, with provisions washed away as the raft became waterlogged in heavy seas, leaving the survivors adrift with not enough to eat or drink. Men were murdered, some thrown overboard and finally the remaining corpses were eaten, before a mere fifteen survivors were rescued. This grisly tale, told in omniscient viewpoint, is immediately followed by the second part of the tale. This section deals with the painting that was made of the event and discusses where it deviates from what happened and why. The tone is scholarly, as if discussing this work in an academic essay. There is even a colour reproduction of the painting included in the book.

The Mountain is an account of Miss Fergusson and Miss Logan’s expedition to Mount Ararat during the reign of Queen Victoria, to the monastery that was built on the site of where Noah’s ark finally ran aground as the flood waters receded. Miss Fergusson is a spinster struggling to come to terms with her father’s death and it is one of his final comments that sends her on this quest. She embodies the spirit of the age, with her determination to continue on the journey, whatever the obstacle and her narrow-minded, but wholly sincere belief in the rightness of her particular religious viewpoint. The story’s ending is abrupt and dark.

Upstream is an epistolary account of Charlie’s experience on film location in the Amazon playing the part of a missionary priest. His series of letters, notes and telegrams to his girlfriend back home provide us with his version of events, once again leading up to an unexpected and violent climax. There is humour in this story – unlike the previous four – but it is undeniably dark.

Parenthesis is my favourite story. This, presumably, is the half-chapter of the title. Barnes seems to be writing as himself, musing on the nature of love, the shape of hearts and exactly what the organ represents, as he lies alongside his sleeping wife. There is a quality of tenderness in the writing that I find deeply moving, especially when juxtaposed with some of the searing irony and bleak outcomes of previous chapters. The quiet, fervent love expressed towards his wife shines out of the book like a beacon.

Project Ararat recounts the life story of Spike Tiggler, onetime astronaut, who upon his return to Earth after throwing a football on the Moon, announces that he wants to discover Noah’s ark. We learn of Spike’s background and his wife’s misgivings when he first embarks on this project. There are interesting and disturbing echoes between Spike and Miss Fergusson in their joint desire to find the ark. The ending of the story is ironic and darkly humorous – if you enjoy a good laugh at the blacker end of the spectrum.

The final chapter in this book is an account of heaven told from the viewpoint of an unnamed man. We learn of his initial delight at the wonderful breakfasts, the shopping expeditions and the superb rounds of golf – and what he does next to survive eternity. Like the first story, this tale is plain funny and had me laughing aloud in places.

I found this book a real mixture of light and dark. The theme of survival, snaking around the metaphor of Noah’s ark, was intriguing. Barnes seems to be saying that those who grit their teeth and hang in there are not necessarily the best or nicest. Just determined. That Barnes is a superlative writer is a given. This book showcases his ability to write in a variety of styles, convincingly portraying both men and women through a number of experiences and timescales. I suspect that I will be musing upon the ideas and characters in this book for a long time – but I do have a niggle.

This is a novel like no other – provocative, superbly funny, a wonderful and most original work… gives the reader a sense of ebullient, whooping joy

This is a direct quote from the blurb on the back of the book. The Guardian reviewer who penned such fulsome praise was right in many respects. It is provocative. It is original and very well written. But superbly funny? Gives the reader a sense of ebullient, whooping joy? Not this reader. I enjoyed the occasional shafts of humour, but found the darkness running through the book didn’t leave me even slightly joyful. I’m not convinced that Barnes actually intended anyone to skip away from reading it with an extra spring in their step. There is too much in there designed to shock and jolt us out of our comfort zone. So once more, I’m up on my soap box, having a moan about misleading blurb. This thoughtful, uncomfortable and well-crafted book deserves better than to be tossed aside in disgust by a reader searching for a light-hearted ‘joyous’ romp through history.
9/10