My sister has moved back to her own flat, which is really good news as she is hopefully now on the road to recovery. Though I am missing her – if the road works would allow it, she is only ten minutes away.

On Thursday, Mhairi came over for the day and we spent some of the time poking the Marketing Monster with a big stick, which is both terrifying and enjoyable. Other than that, I’ve been busy line editing Breathing Space with the help of Dragon’s dictation tool, as I follow the manuscript with a cursor. It’s time-consuming, but I don’t know another way to do it, as my speed-reading habit isn’t conducive to weeding out those fiddley mistakes that dog my writing.

Yesterday, I went over to my sister’s and we watched the Royal Wedding together, having great fun critiquing the outfits while quaffing tea and jam doughnuts. It was a wonderful service and I wish the couple all the very best in their life together.

stole her memories, and transformed her into a soldier. But Solanine refuses to give up. Now that she and her fiancé have located the leader of a rebel group, she believes she can finally bring Ember home. But then the soldiers raid the rebels, killing her fiancé and leaving Solanine alone with her demons and all the weapons needed for revenge.

After raiding a rebel camp, sixteen-year-old Ember doesn’t understand why killing some boy bothers her. She’s a soldier—she has killed hundreds of people without remorse. But after she fails a mission, the rebels hold her hostage and restore her memories. Ember recognizes her sister among the rebels and realizes the boy she killed was Solanine’s fiancé.

This was certainly a dystopian world, leaving a trail of devastated, broken people in its wake and the writing was intense and fast-paced.

At St Mary’s Institute of Historical Research, the historians don’t just study the past, they revisit it.

Behind the strait-laced façade of a conventional academic institution, the secret of time travel is being used for ground-breaking and daring historical research, taking the historians on a rollercoaster ride through history. Meanwhile, within St Mary’s itself, there are power struggles and intrigues worthy of a book in themselves.

Max and Leon are reunited and looking forward to a peaceful life together. Sadly, they don’t even make it to lunchtime.
From 17th-century London to Ancient Egypt and from Pompeii to 14th-century Southwark, Max and Leon are pursued up and down the timeline until, finally, they are forced to take refuge at St Mary’s – where a new set of dangers await them.

After the darkness of my previous read – I wanted something with humour, so I turned to this offering on my TBR pile. It didn’t disappoint. Packed with adventure that had me laughing aloud and nearly weeping, I finished this one buzzed and re-energised. Nobody does it like Jodi…

Scourged – Book 9 of the Iron Druid series by Kevin Hearne
Unchained from fate, the Norse gods Loki and Hel are ready to unleash Ragnarok, a.k.a. the Apocalypse,

upon the earth. They’ve made allies on the darker side of many pantheons, and there’s a globe-spanning battle brewing that ancient Druid Atticus O’Sullivan will be hard-pressed to survive, much less win. Granuaile MacTiernan must join immortals Sun Wukong and Erlang Shen in a fight against the Yama Kings in Taiwan, but she discovers that the stakes are much higher than she thought.

Meanwhile, Archdruid Owen Kennedy must put out both literal and metaphorical fires from Bavaria to Peru to keep the world safe for his apprentices and the future of Druidry. And Atticus recruits the aid of a tyromancer, an Indian witch, and a trickster god in hopes that they’ll give him just enough leverage to both save Gaia and see another sunrise. There is a hound named Oberon who deserves a snack, after all.

I have read and enjoyed all the previous books in this series, so hoped that this one would bring all the plotlines to a satisfactory conclusion. It was a delight to plunge back into this world for ending to work so well.

The Flowers of Vashnoi – Book 14.1 of the Vorkosigan Saga by Lois McMaster Bujold

Still new to her duties as Lady Vorkosigan, Ekaterin is working together with expatriate scientist Enrique Borgos on a radical scheme to recover the lands of the Vashnoi exclusion zone, lingering radioactive legacy of the Cetagandan invasion of the planet Barrayar. When Enrique’s experimental bioengineered creatures go missing, the pair discover that the zone still conceals deadly old secrets.

This novella takes us back to the amazing world Bujold is rightly best known for writing – what a treat this little gem is. The only grumble I have is that it ended too soon.

Can’t-Wait Wednesday featuring The Flowers of Vashnoi – Book 14.1 of the Vorkosigan Sage by Lois McMaster Bujold

5 ways you should not react when an annoying friend says they don’t read https://thisislitblog.com/2018/05/13/5-ways-you-should-not-react-when-that-annoying-friend-says-they-dont-read/ Yes… I’m aware this was published over a week ago – but I’ve only just caught up with it and figured you would still want a giggle over your Sunday cuppa…

Get Caught Reading https://charlesfrenchonwordsreadingandwriting.wordpress.com/2018/05/17/get-caught-reading/ I’m spreading appreciation for my favourite hobby – and this is a great scheme to promote a love of books…

A Summary and Analysis of the ‘Bluebeard’ Fairy Tale https://interestingliterature.com/2018/05/13/a-summary-and-analysis-of-the-bluebeard-fairy-tale/ I love the insights offered in the articles produced by this cracking site…

Thursday Doors – Jacobean https://jeanreinhardt.wordpress.com/2018/05/17/thursday-doors-jacobean/ This is another lovely set of doors, windows and graves… there isn’t anything more evocative than the ruins of a long-ago building.

Fabulous opportunity to get hold of over a 100 sci fi books featuring feisty females… https://claims.instafreebie.com/gg/rvyoTzZB9pvCEbrw2lN4 There is a wonderful spread of books featured for fans wanting more ebook goodness in their lives of the science fiction kind.

Have a great week and thank you very much for taking the time and trouble to visit, like and comment on my site.

I thought this a fascinating premise and am always attracted by a YA dystopian science fiction world as a number of them have proved to be interesting and enjoyable reads.

You may live as a soldier or face death. Choose wisely.
Solanine Lucille wants her little sister back. Eight years ago, the government kidnapped her sister Ember, 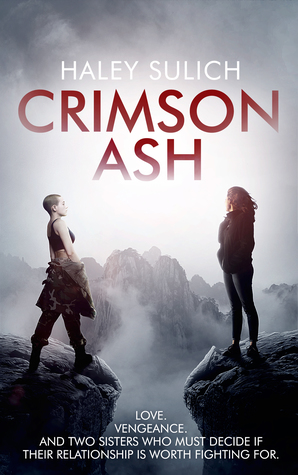 stole her memories, and transformed her into a soldier. But Solanine refuses to give up. Now that she and her fiancé have located the leader of a rebel group, she believes she can finally bring Ember home. But then the soldiers raid the rebels, killing her fiancé and leaving Solanine alone with her demons and all the weapons needed for revenge.

After raiding a rebel camp, sixteen-year-old Ember doesn’t understand why killing some boy bothers her. She’s a soldier—she has killed hundreds of people without remorse. But after she fails a mission, the rebels hold her hostage and restore her memories. Ember recognizes her sister among the rebels and realizes the boy she killed was Solanine’s fiancé.

As you can see, there are some heavy-duty events along with the resultant emotional cost going on in this story. I had thought the sibling relationship would the at the heart of the story. In the event, because this is an action-led adventure rather than all about the characters, while it is an important part of the plot, it doesn’t particularly drive it forward. Apart from anything else, the sisters spend a significant part of the book at cross-purposes with each other.

To be honest, I’m still not completely sure of my response about this one – there is a great deal of action and the world is bleakly awful, with a psychotic monster running the City of Graven. The consequences of existing within such a dark landscape, pervaded by loss are clearly spelt out – alcoholism and suicide are depicted within the story by some major characters and kudos to Sulich for having the courage to depict protagonists who are not invincibly cheerful in the face of hopeless odds against them.

But I did find the plot looped along a pattern, where something bad happens, one of our protagonists is cast down, painfully rallies to the point of fighting back, only for something else bad to happen so that they are cast down, before rallying… And this happened to most of the main protagonists. Fortunately, the final climax broke free from that.

I found the City of Graven really fascinating and would have liked a bit more insight into exactly how it was set up and why. Overall, it was an action-packed, intense read and is ideal for fans of YA dystopian worlds where it’s all about what happens next.
7/10