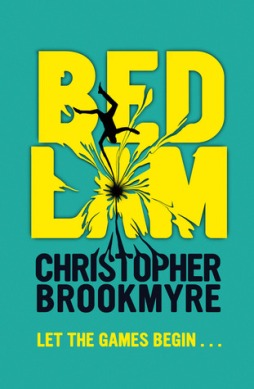 series featuring investigative journalist Jack Parlabane – see my review of Attack of the Unsinkable Rubber Ducks here. So when I saw that he had written a science fiction book, it was a no-brainer I would be checking out Bedlam.

Ross Baker is an over-worked scientist developing medical technology for corporate giant Neurosphere, but he’d rather be playing computer games than dealing with his nightmare boss or slacker co-workers. He volunteers as a test candidate for the new tech – anything to get out of the office for a few hours. But when the experiment is over he discovers he’s not only escaped the office but possibly real life for good. He’s trapped in Starfire – a video game he played as a child – with no explanation, no backup and, most terrifyingly, no way out.

Well, this book took me back – no, I’ve never been a gamer, apart from dabbling with Pacman back in the 1970’s – but I had a son who was… While visiting the familiar trope of a human-trapped-inside-a-computer-game (cue Daft Punk’s Tron soundtrack), Brookmyre attempts to cover several other bases with this book.

Ross grapples to adjust to his new surroundings, however he is fortunate in being very familiar with the landscape as he used Starfire as an escape from his parents’ quarrelling as a teenager. This allows him to quickly get used to the inevitable fights with which he regularly gets embroiled – while he is desperate to return to reality, he also throws himself into the fight games with enthusiasm, recalling how to heal himself and where various weapons caches are. Unlike poor Bob, an accountant, who falls asleep one day and wakes up in the middle of the virtual battle without a clue about what to do and how to survive.

As Ross finds himself having to flee the Nazi-type police force who are chasing him through a variety of worlds, he finds himself revisiting a number of games from his past and the book turns into something of a nostalgic journey for all keen gamers. There is a fair dollop of humour – although I did feel the sweary phrases are more effective in his Scottish underworld, rather than dropping out of the thoughts/mouth of his geeky scientist.

What distinguishes this book, however, is Brookmyre’s examination of the probability of ‘ancestor simulations’ based around Nick Bostrom’s theory that in the unlikely event of humanity managing to survive until it reaches posthuman status, it is probable that we are living in a computer simulation. As part of the storyline, Brookmyre touches on the issue of downloaded characters – what are their intrinsic rights? Should they have any consideration, given they have no bodies and are able to be killed continuously? Or given they are capable of feeling pain, hope, love and hate just as their real life counterparts, should they also be given some legal protections so they don’t end up being used in medical experiments, or military tactical exercises against their will?

Brookmyre has attempted to cover a lot of ground in this book – part nostalgic homage to past games now long gone; part adventure thriller; part discussion and examination of issues that we will surely need to address, if we manage to survive the plethora of environmental challenges that confront us over the next couple of centuries. Does he pull it off? Mostly… although the execution is somewhat uneven and Ross is not as much the trapped victim Brookmyre initially paints him – he relishes killing the opposition far too much in some of the games to completely convince as the put-upon protagonist. For all that, this is a novel that is worth reading because in the best tradition of science fiction, it raises issues we should all be considering for the future.
8/10

The select few of you who regularly visit my blog will realise that in addition to my passion for speculative fiction, one of my other weaknesses is crime. I came across this gem in the library one rainy day last week and it has brightened my life ever since.

Do you believe in ghosts? Do we really live on in some conscious form after we die, capable of communicating with the world of the living?

Aye, right. That was Jack Parlabane’s stance on the matter, anyway. But this was before he found himself in the more compromising

position of being not only dead himself, but dead with an exclusive still to file. From his position on high, Parlabane relates the events leading up to his demise, concerning the efforts of charismatic psychic Gabriel Lafayette to reconcile the scientific with the spiritual by submitting to controlled laboratory tests.

Parlabane is brought in as an observer, due to his capacities as both a sceptic and an expert on deception, but his certainties crumble and his assumptions turn upside down as he encounters phenomena for which he can deduce no rational explanation. One thing he knows for certain, however: death is not the end – it’s the ultimate undercover assignment.

The investigative journalist, Jack Parlabane, who sort of solves this crime, has appeared in four previous Brookmyre novels. He leaps off the page with all the force of Robbie Coltrayne’s Cracker – and with as many opinions, which he doesn’t shy away from sharing with the rest of us. So, in addition to enjoying a really well-crafted thriller with a number of BIG surprises that I didn’t see coming, I was also treated to a series of intelligent discussions on the nature of belief, its impact on society and how it can be used to exploit victims when they are extremely vulnerable.

While I am not sure that Parlabane voices all of Brookmyre’s beliefs, it is an intriguing change to come across a fictional crime-fighter with an instinctive dislike and distrust of the Establishment. Also refreshing to have said argumentative, awkward customer in a strong marriage… Brookmyre has cited Ford Prefect from Douglas Adam’s Hitch-Hiker’s Guide to the Galaxy as his inspiration for Parlabane, commenting, ‘I always adored the idea of a character who cheerfully wanders into enormously dangerous situations and effortlessly makes them much worse.’

As I’ve mentioned, the plot is exceptionally well crafted. The setting – contemporary Scotland – works very well, and so it should, seeing as its Brookmyre’s own stamping ground. His cast of characters are strongly depicted with convincing backgrounds, so when he shifts into the alternative viewpoints, they are as equally compelling as Parlabane. Despite the fact that this is a reasonably substantial read with plenty of musing about the state of the world, at no point did it drag. This is a skilful, intelligent writer, who manages to deliver the whole package with energy, verve and absolute confidence. The book won the 2007 Glenfiddich Spirit of Scotland Award for Writing. I’m not surprised – by any benchmark, it is an outstanding read.
10/10