I had previously read and reviewed the prequel to this series, Brink’s Unfortunate Escape from Hell, so when I was approached by the publishers and asked if I would like to read and review this book, I 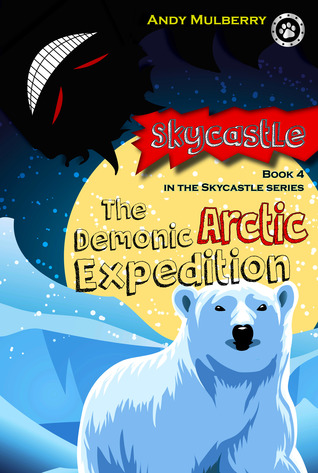 Fast-paced, action-packed and funny, perfect for reluctant readers. The Demonic Arctic Expedition is the fourth in a series of MIDDLE GRADE books for fantasy-adventure loving readers. This book contains a scowling demon, an ancient weapon, an adorable Hound of Hell, a sort of angel, a dragon, an ordinary boy and an extraordinary castle. And a not so cuddly polar bear…

I thoroughly enjoyed this latest addition to this reading series, designed to enthuse reluctant readers. As an ex-teacher, I have a clear idea of what books will persuade a book-shy youngster (usually a boy) to pick something off the shelves. It cannot be too long; the print has to be reasonably large and clear without looking ‘babyish’; the vocabulary cannot be too wide-ranging and there needs to be plenty of word repetition without making it obvious; there needs to be lots of action and loads of pace. So does Mulberry succeed in ticking all these boxes? Oh yes.

In addition, she also has provided an entertaining Prologue in the first person narrative of Jack, the main protagonist for those who haven’t yet had the pleasure of reading the previous books, so our reluctant reader isn’t tipped into the middle of an adventure and left floundering. Essentially Jack and Brink are on the hunt for gold, which leads them to the Arctic where they believe there is a great hoard so they can pay off the Collector, who is on their trail looking for the money Hell charges for hiring out a demon, namely Brink.

Yes… the plot is every bit as surreal and whacky as it sounds. There is also an enchanted sword and a dragon, who spends most of the time coating the dungeon in dragon snot as he has a cold, which he has given to the guardian angel… Mulberry has a trick of pulling in all sorts of classic characters and themes from fantasy and subverting them in her Skycastle adventures.

There isn’t huge depth of character as action and pace are king here, but that doesn’t mean I don’t care about Brink or Jack – there is an edge of anarchy in these stories that means I’m not completely sure where they are going to end up and I certainly didn’t see the outcome of this particular story coming. Mulberry does exactly what it says on the tin – and if you have a child between 9-12 who isn’t overly enthusiastic about picking up a book, consider this one.