I picked this one last year during a Book Funnel sales promotion, when the cover and blurb caught my eye. Would I enjoy it?

BLURB: The New Gaian Empire is crumbling. An undefeatable enemy from the outer reaches is sweeping across the frontier stars, slagging worlds and sowing chaos. Soon, they will threaten the very heart of civilized space. James McCoy never thought he would get caught up in the Hameji wars. The 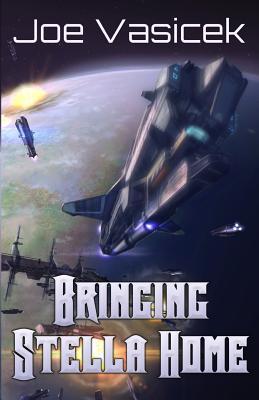 youngest son of a merchanter family, he just wants the same respect as his older brother and sister. But when the the Hameji battle fleets conquer his home world and take them away from him, all of that is shattered forever.

So… a younger brother manages to flee the ruthless invaders along with his father, but then is determined to return to rescue his older brother and sister. This one is told in multiple viewpoints where we learn of James’ desperate efforts to get back to Ben and Stella, in between discovering what happens to them. The risk in swinging around the viewpoints is that the reader will identify more with one storyline and skimread the others. I have to say that Stella’s story particularly held me as her character developed from the panicky, desperate teenager quite rightly terrified by the prospect of what lies ahead of her, so at times I did whip through the other plotlines to get back to her. However, as the story moved forward, I found I was doing that less and less as Vasicek is good at showing character development and peopling his space opera adventure with characters I cared about, even some of the bit players. I’ve found myself thinking a lot about the eunuch detailed to serve Stella in her new life, since I finished the book.

The other strength of this story is that while events unspooled reasonably predictably at the start – they had to in order for the premise to work – Vasicek quickly allowed his plot to take several left turns into something for more edgy, so that by the time I was in the middle of this one, I genuinely couldn’t work out how it was going to end. Which was also something of a shock.

All in all, this pacey, well-crafted space opera adventure served up some real surprises and laid a strong groundwork for this series. Recommended for fans of space opera adventure, where the plot doesn’t go according to plan. But be advised the storyline involves forced abduction and rape, although that isn’t depicted in any detail.
8/10