I liked the look of the cover and the sound of the first part of the blurb – which is far too long
and chatty for my taste – so requested this one from Netgalley. I’m so glad I did.

Orphaned, raised by wolves, and the proud owner of a horned pig named Merlin, Weylyn Grey knew he 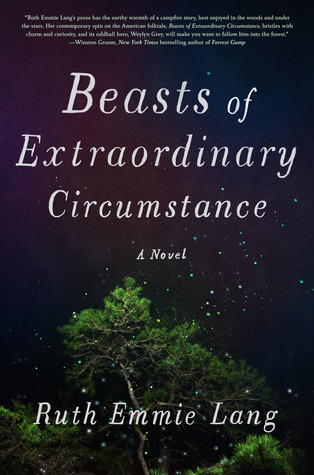 wasn’t like other people. But when he single-handedly stopped that tornado on a stormy Christmas day in Oklahoma, he realized just how different he actually was.

This wasn’t remotely what I was expecting. What I thought I was getting was an urban fantasy tale of a werewolf with something of a Jungle Book twist. What this book actually covers is the life of Weylyn Grey, mostly through the viewpoint of people who come into contact with him and whose lives he affects. From the time he is found roaming around the forests with a pack of wolves, he is clearly unusual. But other odd things continue to happen around him.

Given this is set in contemporary America, these unusual talents don’t encourage Weylyn to don a spandex suit featuring a cape and his underpants over his tights – instead they are a constant concern as they often put those around him in acute danger. There is a particularly poignant scene just over halfway through the book where we learn why he hates snow so much.

There are a number of viewpoint characters throughout this book – something I’m not normally a huge fan of. Some of them only feature for a single section, while others return more than once. But each one plays a role in Weylyn’s life as they come into contact with him and become aware of his strangeness. While it has been done before, building the characterisation of the main protagonist through the various viewpoints of a series of transitory characters is a risky strategy. This normal structure most often occurs in murder mysteries where we gradually learn about the victim through the eyes of those who knew her and the investigating team looking into her murder. If we don’t like the victim all that much, it doesn’t really matter – the issue powering the narrative drive in such stories is discovering who killed her. However, for this book to work on almost any level, we need to like and empathise with Weylyn and his plight, because if we don’t care then there’s no point in continuing to read on.

While this may be her debut novel, Lang clearly is an experienced, competent writer with a clean, unfussy writing style that quickly drew me into this book and kept me engrossed until the end. I was sufficiently invested that despite the fact that I could predict the probable ending some way off, I was perfectly happy to relax and go with the flow. And when the ending finally did come, I was left with a lump in my throat.

There is a warmth and gentleness about Weylyn that drew me to him. Lang doesn’t actually sugarcoat his life – some harsh things happen, but there is a steel core of optimism running through this book that swept me up and had me believing that in the end, the right folks would prevail. If you are looking for something a bit different with plenty of heart and adventure, along with a splash of magic realism, then this comes highly recommended.
8/10

This was the first full working week since I recovered from the flu, so Monday and Tuesday saw me teaching

as usual. I am now on the last lap of the final edits for Dying for Space which is the sequel to my debut novel, Running Out of Space, and am planning to release it on 14th December. So I am in the process of preparing for the blog tour – Lola is once more organising it for me to run from 14th-31st December. And I was a bit startled to realise when about to publish my usual Friday Face-off blog, that it was my 1,500th post…

On Wednesday I returned to Pilates and Fitstep, taking it easy, which was just as well as I was horribly unfit and Friday found me stiff in places I didn’t even know I had muscles. On Thursday, Mhairi came over and offered her usual awesome help and companionship. On Friday evening Himself and I actually had a date night – we went out to The Dragon, our favourite restaurant and afterwards returned home to snuggle up on the settee and watch the final two episodes of season 7 of Game of Thrones. Oh my goodness – what a finale! It was raining yesterday – of course it was as we were due to pick up the children. My daughter invited us to stay for brunch, which was wonderfully good. On the way home we swung by Worthing for some shopping and in the afternoon my sister came over for a meal and we sat and watched Strictly with Oscar, aged 7, passing judgement on the dancing and the judging.

Today, I will be spending most of the day filming Tim’s script in a converted barn for the medieval scenes. We are nearly at the end, so fingers crossed it doesn’t rain and the light levels are good. I hope everyone is also having a great weekend.

Gnomon by Nick Harkaway
Gnomon, which took Harkaway more than three years to complete, is set in a world of ubiquitous

surveillance. Pitched as “a mind-bending Borgesian puzzle box of identity, meaning and reality in which the solution steps sideways as you approach it”, it features: a detective who finds herself investigating the very society she believes in, urged on by a suspect who may be an assassin or an ally, hunting through the dreams of a torture victim in search of the key to something she does not yet understand; a banker who is pursued by a shark that swallows Fortune 500 companies; Saint Augustine’s jilted mistress who reshapes the world with miracles; a refugee grandfather turned games designer who must remember how to walk through walls or be burned alive by fascists; and a sociopath who falls backwards through time in order to commit a murder.
This took me some time to complete, but it was worth slowing down my normal reading speed to savour the dense prose and keep track of the characters. An unusual, rewarding read with some surprising twists and a poignant, powerful ending.

Orphaned, raised by wolves, and the proud owner of a horned pig named Merlin, Weylyn Grey knew he wasn’t like other people. But when he single-handedly stopped that tornado on a stormy Christmas day in Oklahoma, he realized just how different he actually was.
This is another quirky, unusual read which defies strict genre classification. It’s a lovely, warm-hearted tale that nonetheless avoids sentimentality. I thoroughly enjoyed this one.

The Prisoner of Limnos – Book 6 of the Penric and Desdemona novella series
In this sequel novella to Mira’s Last Dance, Temple sorcerer Penric and the widow

Nikys have reached safety in the duchy of Orbas when a secret letter from a friend brings frightening news: Nikys’s mother has been taken hostage by her brother’s enemies at the Cedonian imperial court, and confined in a precarious island sanctuary.
This little gem is yet another excellent addition to this entertaining, unusual series and takes the story that halted at the end of Mira’s Last Dance onward, encompassing yet another exciting adventure.

Sergeant Ted Regan has a problem. A son of one of the great corporate families, a Scion, has gone missing at the front. He should have been protected by his Ironclad – the lethal battle suits that make the Scions masters of war – but something has gone catastrophically wrong…
This supposes that in a post-apocalyptic world where resources are scarce, corporations are involved in the inevitable wars with the top families encased in top-of-the-range armour that makes them almost invulnerable. Needless to say when the dirty jobs are handed out, it’s the regular grunts that end up having to pick up the pieces…

*NEW RELEASE SPECIAL* Review of The Mongrel Mage – Book 19 in the Saga of Recluce series by L.E. Modesitt Jr

My 1,500th Post… Friday Face-off – Much as I love you, I cannot permit you to maul this particular coat – featuring Frederica by Georgette Heyer

Gerry Rafferty: Her Father Didn’t Like Me Anyway https://theimmortaljukebox.com/2017/10/31/gerry-rafferty-her-father-didnt-like-me-anyway/ Once more Thom at The Immortal Jukebox presents a gem of a tune, complete with knowledgeable analysis.

Pirates for Halloween? https://zenandtheartoftightropewalking.wordpress.com/2017/10/31/pirates-for-halloween/ Viv discusses this ongoing blight that steals income from authors – and how it can also cause other serious consequences..

10 of the Best Seduction Poems https://interestingliterature.com/2017/11/01/10-of-the-best-seduction-poems/ As the weather cools and we start snuggling up together for warmth, we reflect on other ways to generate some heat…

When I’m Almost Done Reading a Good Book… https://powerfulwomenreaders.wordpress.com/2017/11/01/when-im-almost-done-reading-a-good-book/ Yes… I think we’ve all been there.

Thank you very much for taking the time and trouble to visit, like and comment on my site and may you have a great week.

76% Her name was Nancy, and even though Clay was disruptive, she like me because the angel, Micah,

had also come through her school, so it was obvious I wasn’t the problem. “How do you do it?” she asked the day Clay jumped on his desk and broke it. “How do you live with two boys? One is enough to drive me crazy.”

“I grew up with four sisters,” I said. “I’d take a fraternity over a sorority any day.”.

BLURB: Orphaned, raised by wolves, and the proud owner of a horned pig named Merlin, Weylyn Grey knew he wasn’t like other people. But when he single-handedly stopped that tornado on a stormy Christmas day in Oklahoma, he realized just how different he actually was.

Whatever I thought this book would be – it isn’t. Set in the US in a contemporary setting it depicts someone with paranormal superpowers. But it is as far away from a superhero adventure as you can possibly get. Beautifully written, the story circles around Weylyn’s life mostly told by the people he comes into contact with and I’m loving it.