I heard an interview by Kathryn Stockett with Mariella Frostrup on Radio 4 about this book and decided to get a copy from the library to see what all the fuss was about. 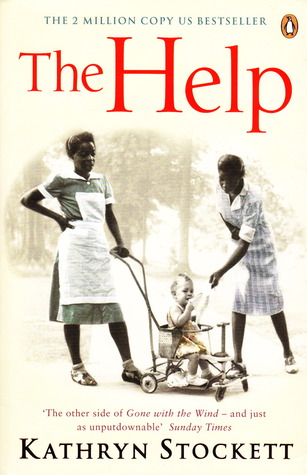 Enter a vanished world: Jackson, Mississippi, 1962. Where black maids raise white children, but aren’t trusted not to steal the silver… There’s Aibileen, raising her seventeenth white child and nursing the hurt caused by her own son’s tragic death; Minny, whose cooking is nearly as sassy as her tongue; and white Miss Skeeter, home from college, who wants to know why her beloved maid has disappeared.

Skeeter, Aibileen and Minny. No one would believe they’d be friends; fewer still would tolerate it. But as each woman finds the courage to cross boundaries, they come to depend and rely upon one another. Each is in search of a truth. And together they have an extraordinary story to tell…

Skeeter, back from college, finds she doesn’t fit in so well with her married friends’ social life when the talk turns to installing a separate bathroom for the maid so the family isn’t in danger of catching ‘colored diseases’. Missing the maid who brought her up, she is drawn to motherly Aibileen and turns to her for help when she lands the job of writing a column in the local paper solving domestic problems, such as removing stubborn stains and unscrewing broken light bulbs. So when she gets the chance to write about the lives of the black women who help out in all the neighbouring white households, once more she asks Aibileen to help in contacting other maids for their stories – good and bad – of working for white folks. And Aibileen asks Minny…

Stockett was brought up in Mississippi and it shows. The description of the food, heat and landscape is pitch perfect. It is an effort to remember that this is only forty-nine years ago – and yet, the rigid standards imposed on everyone in this hide-bound rural society inevitably falls most heavily on those at the bottom of the heap – black women. This book could have degenerated into a Gone With the Wind pastiche of southern society, or shown Aibileen and Minny as downtrodden victims. Fortunately, it does neither. Both the black protagonists are shown to be intelligent, spirited individuals with their own particular coping strategies for getting through their difficult lives. Aibileen’s religion is an active force in her life and contrasts well with her shafts of desert dry humour that runs like a delicious chocolate thread throughout her narrative. Hm… talking of chocolate, you may not be quite so enthusiastic about the thought of chocolate pie by the end of the book – and I’m not saying anything more about the method that Minny uses to express her anger at all the injustices she has to contend with working for a manipulative, unscrupulous woman.

We see all the social strata in Jackson and what it means to be an acceptable member of the ‘in’ crowd – and what happens when you aren’t. Skin colour isn’t the only defining factor and as a Brit, I found it fascinating to see that 1960’s Jackson was every bit as snobbishly exclusive as any 18th century London salon, while poor Celia struggles to befriend anyone at all. Her breeding – or lack of it – along with her catastrophic dress sense doom her to be constantly snubbed.

However, while this subplot is engrossing, it isn’t the engine that drives the plot forward – it’s the threat of the violence by white racists against the growing civil unrest. Skeeter plunges into this project in order to produce a publishable book, and only as the maids start confiding in her does she begin to realise just how much they are risking. The growing tension as the book starts being read by the people who appear in it, with the protagonists’ dread of discovery brings home just what a dangerous time it was for dissenters. It is a powerful foil for the outwardly genteel concerns about appearance, cooking and well run homes.

Stockett manages the three narratives very well and in my opinion, manages to avoid most of the pitfalls that could have mired her. This is an impressive debut novel that manages to tell a gripping entertaining story about a raw, difficult stage in American history – and the fact that many people still recall it must have created an added complication.

Any niggles? Well, Stockett manages to mostly avoid lapsing into sentimentality, however one scene in the church when Aibileen is presented with a gift wrapped book for Skeeter had me wriggling uncomfortably. The enthusiastic applause and words of the reverend were just a little OTT for my taste.

Apart from that one jarring scene, though, I felt this is an excellent book that tells a powerful story with humour and adroitness. I look forward to reading Stockett’s next offering.