This week on the weekly Musing Mondays blogspot at A Daily Rhythm, the questions was: What books are you hoping to get for Christmas? What with one thing and another – it’s been a bit full-one at chez Higbee this last week – I didn’t get around to to answering it on Monday.

But I DO have a wishlist, so here goes…

The Just City by Jo Walton – she is an awesome author. I haven’t yet read anything she’s written that I don’t absolutely love and no two books or series remotely resemble each other in either style or subject matter. Which, in my experience, is really unusual. I haven’t yet got this one, but I DEFINITELY want it!

Mother of Eden by Chris Beckett – Dark Eden blew me away and wormed its way into my inscape, so I have often wondered about the complex, disturbing world Beckett produced. When I recently realised the sequel was out, I knew it was one of the books I’d HAVE to get hold of – and soon…

The Sirantha Jax series by Ann Aguirre – No… I’m not being greedy. I don’t want the WHOLE

series. I’ve already got the first three Grimspace, Wanderlust and Doublebind – I just want the NEXT three – Killbox, Aftermath and Endgame. They are such fun, full of adventure and excitement – and I LOVE the gutsy heroine.

The City’s Son by Tom Pollock. I saw him in action at Fantasycon 2014, discussing worldbuilding on an awesome panel with Kate Elliott and I keep promising myself to track down one of his books – and haven’t yet got around to it. So maybe Father Christmas will help me out…

Ghost Girl by Lesley Thomson. This is the second in the amazing detective series, The Detective’s

Daughter. I’ve loved Lesley Thomson’s writing since my mother recommended A Kind of Vanishing – and again, this is one which I’ve wanted to get for a long time, but haven’t got around to.

Um. I think that’s it. For the time being. Although I’m aware there are probably some VITAL books I’ve not mentioned. What about you – are there any books prompting you to write begging letters to the North Pole?

We drove up on Thursday, knowing it was going to be something of a trek from the south coast up to York. Himself didn’t want to go on the train and he sold the notion of driving all the way by pointing out that we’d be able to bring back a whole lot more books if we took the car – but the truth is, he HATES being a passenger as he is a train driver.

The Royal York Hotel is a large 19th century sprawling building with generous-sized bedrooms, a friendly staff and plenty of character. But it is also expensive – even the con rates were steep and far too many of our writing friends were staying elsewhere. We only managed to afford it by saving frantically and making this break our main holiday of the year.

Ceremony, hosted by Lee Harris. It was deftly done, with the guests of honour being introduced – awesome novelists Kate Elliott, Charlaine Harris, screen writer Toby Whithouse and cover artist Larry Rostant. They all gave a short talk – I could have listened to Charlaine Harris all night as her soft Southern accent is the aural equivalent to strawberries and cream – with just the right mix of humour and ‘this-is-what-I-do’. Lee concluded by whetting our appetites for pleasures to come.

I’d planned to catch the 4 pm Rejectamentalist Manifesto panel, but got sidetracked in the bar catching up with friends – Alex Bardy, Susan Bartholomew, Justin Newland and meeting the very funny K.T. Davies and her husband Alex for the first time. I couldn’t make her book launch, but managed to get hold of her new book Breed – Fox Spirit books are always worth a look.

Paul Cornell and his wife hosted an entertaining version of the TV quiz Pointless at 5 pm, which was great fun. Many thanks to everyone who helped organise it – it must have involved a HUGE amount of effort organising the 100 geeks who answered all the questions in advance…

I took part in the Poetry Round Robin, organised and hosted by Allen Ashley. As ever, the standard was impressive and I had the bad luck to have to follow Tina Rath, whose performance of her humorous and creepy offerings is always one of the high spots of the evening. Many thanks to Allen for his work in ensuring that poetry is always represented at Fantasycon – there was a range of interesting, thought provoking poems.

My only regret is that I missed a large chunk of the Karoke Evening – the standout performance I did witness was Lee Harris performing ‘Hotel California’, complete with air guitar rendition.

Saturday 6th September
Himself’s birthday – so I took him to the Dealer’s Room and bought him one or three books… We ended up taking 42 home with us.

We attended The Pen vs the Sword panel, where Adrian Tchaikvosky, Juliet McKenna, Fran Terminiello and Clifford Beal discussed how real fight scenes used to work and were good enough to demonstrate their points as they all have experienced re-enactments or are expert in various fighting techniques. As we were all keen for more when time ran out, they adjourned to the bar and were good enough to continue demonstrating how various fights would pan out. Very entertaining and informative and one of my personal high spots of the whole conference. I now know what muscle memory is…

How To Get Noticed moderated by Allen Ashley was another good ‘un. Nazia Khatun, Sophie Colder and Ruth Tross gave us an insight as to how librarians, book sellers and publicists approach spreading the word about new books, while Graeme Reynolds spoke with impressive authority on how to use Amazon’s ranking algorithms to get your self- published books maximum visibility.

She Ain’t Heavy, She’s my Sister was an intriguing panel about the dearth – or otherwise – of strong, supportive relationships between women in SFF. Unfortunately, the moderator badly let down panel members by neglecting to structure the discussion – at all. While some of the panel members coped well with this tactic, it left Charlaine Harris – clearly reluctant to leap into the conversational melee – sitting quietly. Which was frustrating, as I know she has depicted a number of interesting, supportive female relationships in all her writing, particularly the Sookie Stackhouse series.

SFF and Politics was the complete opposite – Lizzie Barrett kept this one running with apt, directed questions to the panel of Jaine Fenn, Foz Meadows, Catherine Hill and Adrian Tchaikovsky. The result was a fascinating discussion about why the fantasy default is some faux early Medieval period and whether science fiction politics is as really as liberal and left as is often assumed… This one could easily have gone on for another hour, I felt.

After attending a reading of Susan Bartholomew’s latest book, Himself and I rushed off to the Mass Signing. Hm. Why can’t my favourite authors have piles of their books on the table in front of them, so I can buy them and then get them to sign them?? And I cannot be the only one who finds this a problem – con attendees voted with their feet. There were only a trickle of keen readers wandering around the room, and many writers who were at the conference did not attend the mass signing.

We had a leisurely meal in the hotel with Mhairi Simpson, Susan Bartholomew, Fran Terminiello and Roy Gray, then while Himself had to admit defeat and crawl off to bed before he fell over (something to do with working alternate night and day shifts…) I went off to the disco and flung myself around the floor with reckless abandon – just like everyone else there. Once you unchain authors from their keyboards, they tend to let the freedom go to their heads. Or in this case, their feet… I finally staggered off, a tad warm, to bed just before 1 am.

Sunday 7th September
I was really looking forward to the Worldbuilding Workshop with Kate Elliott and Tom Pollock – and it didn’t disappoint. This was another high point in a con where the panels were consistently good. Kate is an excellent communicator and I’m a real fan of her subtle effective worlds and between them, she and Tom kept up a stream of suggestions and ideas that had me scribbling madly. They sparked off each other, as only colleagues who trust and respect each other can and I walked out of the room buzzing with ideas and excitement. And a promise to myself to get hold of one of Tom Pollock’s books…

The final panel of this con was again on worldbuilding – this time with Camille Lofters moderating with Tiffani Angus, Foz Meadows, Kate Elliott and Peter Higgins contributing. I had thought to attend the panel on editing, but was so fired up by the worldbuilding ideas, changed my mind. It was an excellent discussion, well handled by Camille and ranged across a wide spread of topics. Among other things, I took away from both sessions Kate Elliott’s golden rule: to constantly challenge my assumptions of what is normal. So if I decide to exclude or ringfence an ideology or group of people, it is a conscious choice, not an accidental consequence of unquestioning prejudice.

And that was the end of our con. I’d attended the banquet and Awards Ceremony a few years ago down in Brighton, when it was 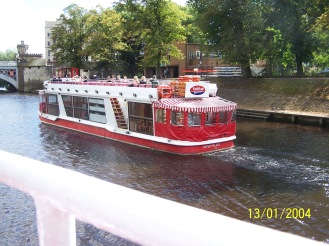 ferociously hot. The food was mediocre, the room was stifling and the PA wasn’t working properly so I couldn’t hear what was going on. So I refuse to repeat the experience. Instead, we’d promised to go on the river cruise just ten minutes away from the hotel – which we did. A lovely, laidback end to a thoroughly enjoyable, if rather more low-key Fantasycon than some of the more recent ones.

Any grizzles? We had to write our own names on the badges this year, instead of having them printed. And it was often difficult to decipher the felt-tipped scrawl of the person I was talking to. So, please – next year could we have a return to the printed badges? But other than that, no. It was great. Many, many thanks to the army of helpers who made Fantasycon 2014 such a success, especially the sainted Red Cloaks who were unfailingly helpful throughout the whole event. See you next year!