And here it is! Picky Eaters is now available as an ebook and in print. Click on the cover below or in the sidebar to be linked to your nearest Amazon store.

As lockdown clamped across my life, along with everyone else, I wanted to do something to help. But all I do these days is write… So I dusted off one of my favourite characters, Casta the Grey. He’d got into a real pickle looking after those pesky grandchildren of his, but what happened next? I decided to find out – and that’s how this longer version came into being. It’s funny and quirky and hopefully will take you away from some of the big, scary stuff going on around us for a while. And I am donating all proceeds from Picky Eaters for the duration of its publication to mental health charities.

BLURB: This tale about family life, dragon-style, is escapist fun for adults. All proceeds to go to mental health charities.

Castellan the Black, now better known as Casta the Grey, has led an eventful life, but these days he’s content to live alone in his mountaintop lair, fending off occasional attacks from the food and waiting to die. At least, that’s what he tells himself.

Babysitting his young grandchildren is definitely not on his to do list. Sammy Jo doesn’t care that the world used to cower before Casta’s wrath. She doesn’t want barbecued knight in armour – it’s tinned food – and that’s that. Sadly, her little brother Billy Bob is more inclined to follow her lead than his grandfather’s, and what’s a grumpy old dragon to do with two such intransigent youngsters?

Things go from bad to worse when he wakes up from a nap to find they’ve been hunting for more appealing treats. Organic, free-range lunch was exactly what they needed, according to a very proud Sammy Jo. He’s never seen the food so upset, and now it’s coming up the hill, armed with spears and bows, hell bent on revenge.

Things go from bad to worse when he has to move in with the rest of the family. Whoever said family life was boring hasn’t lived alongside these two pesky lizards. Keeping his grandkids out of trouble might be more of a challenge than this over the mountain warrior can handle.

Hayley of Far too Fond of Books says: I don’t normally read fantasy but this short story is so lovely. The descriptions of the dragons are fab and it reminded me of books I loved when I was a child and made me wonder why I never reach for the genre anymore. 5 stars

Sneak peek…
He came to with a sudden awareness that he must have dozed off, which was happening more often these days. Still, no harm done… He stretched and yawned, choosing to ignore the patter of dirt falling from his crusted scales. Only as he started to curl up, ready to turn the nap into a proper mid-morning snooze, did he recall he was supposed to be babysitting his pesky grandchildren. Where’d they got to?
Once he located the youngsters huddled in the corner, he decided Billy Bob and Sammy Jo were up to something, so he tip-taloned across the cavern, before whispering, “What are you doing?” in Billy Bob’s ear.
The small dragon shot straight into the air with a shrill squeal, while his sister crouched lower over whatever-it-was in the gloom, gobbling it up in a couple of hurried gulps.
An irritated wisp of smoke leaked from his nostrils. “And why are you eating between meals?”
“’Um unngree…” she mumbled, still chewing.
The delicious whiff of a meaty something didn’t improve his temper. “If you’d eaten all your breakfast, you wouldn’t be wanting something, now!”
“Sorry, Granddad,” Billy Bob whimpered, his wings drooping submissively.
But young Sammy Jo was made of sterner stuff. Her wings remained neatly folded across her back as she announced, “Didn’t like breakfast.”
Impudent little piece! Why, when he was a dragonet, if he’d spoken to a lord so insolently, he’d have been walking around with singed scales for a month. Smoke now was trickling steadily from his nostrils, as he growled, “And what does like have to do with anything? Answer that one, miss! There’s sub-Saharan dragons who’d give their wings for a tasty morsel like the one I picked out for you.”
“They can have it, then,” Sammy Jo said sulkily. “It tasted funny.”
The rank ingratitude! His temper flared, and a gout of flame belched out of his mouth with his roar, “Ahh!”
She dodged his fiery blast with ease. “You can’t singe us, Granddad. It’s not allowed.” Sammy Jo stretched her neck in an unmistakeably female way. “If we’ve been bad, we have to sit on the naughty crag and think about what we’ve done wrong and how to make a-mends.”
He regarded her with smouldering annoyance. “You sound just like your grandmother.”

This book arrived in the post from my lovely sister-in-law, who took me to Bexhill last year for a writing retreat, while she got on with her thesis on medieval attitudes to depression and depressive illness.

BLURB: A book of hope for uncertain times.
Enter the world of Charlie’s four unlikely friends, discover their story and their most important life lessons. The conversations of the boy, the mole, the fox and the horse have been shared thousands of times online, recreated in school art classes, hung on hospital walls and turned into tattoos. In Charlie’s first book, you will find his most-loved illustrations and some new ones too. 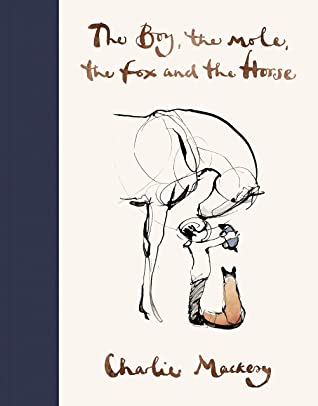 but it takes real skill to turn a dozen or so squiggly lines into a vulnerable-looking little boy, a small mole, an alert little fox and a horse… Hm – that horse. Such a hard creature to draw really well. If I’d any doubts as to Macksey’s real talent as an artist, it is the drawing of the horse – especially when we come to the climax of the book and the drawings stop being squiggly lines and turn into something awesome and magical that brought tears to my eyes…

So we have lovely pictures on each page, but it’s the prose that turns this book from being a winsome little gem into a book with sufficient heft to want it close to me throughout the day, so I can open it when I’m feeling wobbly. The conversations the boy has with the mole, and the horse, in particular, have given me so much comfort with their truth. The one that has stayed with me the most is this quote:

“What is the bravest thing you ever said?” asked the boy.
“Help,” said the horse.

There is so much profound truth in those two lines. How often do we reach the end of our tether, completely in despair – simply because we lack the resources to help ourselves and paralysed with fear to ask others for help? I could have saved myself such misery as a young woman if I’d taken on board that life lesson…

There are profound things about the role of cake in our lives, too, that mole shares with us… It took about ten minutes to read the book from cover to cover and in the space of that time I laughed aloud and I wept – I’m finding myself a tad more emotional, these days. But I stand by the fact that any book which can make me do both in such a short timespan is remarkable. There is no preaching or judgement – just kindness, acceptance in a chat between a small boy and his animal companions.

And this book is right by my side for the duration. Very highly recommended for anyone who feels a tad overwhelmed or frightened right now…
10/10