We are both huge fans of this accomplished, game-changing author, whose Miles Vorkosigan series took a physically disabled character in the far future and redefined what could be done with space opera – see my review of Cryoburn. We have been delighted all over again by her talent in this delightful series of fantasy novellas, set in her World of the Five Gods series, and have followed Penric’s adventures – see my reviews of Penric’s Demon, Penric and the Shaman, Penric’s Mission, Mira’s Last Dance, Penric’s Fox, The Prisoner of Limnos, and The Orphans of Raspay. You’ll notice that my ratings are consistently high and quite right, too. So we were thrilled to hear Bujold was bringing out a new book during lockdown that was guaranteed to sweep us away from the current misery surrounding us, and into another world… Or is it? I have linked this review to the Wyrd and Wonder 2020 event.

BLURB: When a mysterious plague breaks out in the army fort guarding Vilnoc, the port capital of the 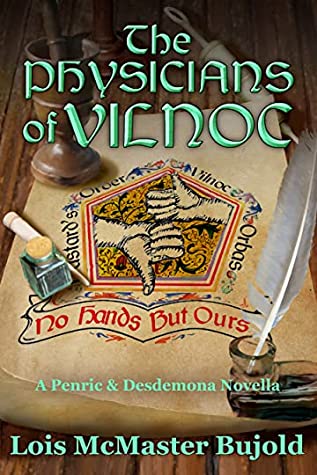 duchy of Orbas, Temple sorcerer Penric and his demon Desdemona are called upon by General Arisaydia to resurrect Penric’s medical skills and solve its lethal riddle. In the grueling days that follow, Pen will find that even his magic is not enough to meet the challenges without help from dedicated new colleagues—and the god of mischance.

Yes… it’s all about a mysterious plague! Apparently Bujold was working on this late last year and into the early part of the new year. I was a bit concerned that it would be too close to home – but I decided to make a start on it and if I found the storyline was all about social distancing and quarantining, I could always DNF it and wait until this crisis passed. In the event, I was immediately pulled into the story by dear old Penric, whom I LOVE and didn’t stop reading until I was finished.

I would suggest that if for some reason, you have encountered this offering without having read any of the other books, do at least take the time to get hold of Penric’s Demon. The original adventure sets up the lovely premise running through this series, and while I’d suggest you then work your way through the rest of the novellas on the grounds that it seems a real shame not to read such a cracking series in the right order, you certainly won’t flounder too much. Bujold is far too accomplished a writer for that to happen – and the manner in which she has nailed the novella form proves it. The pages simply turned themselves…

I had been initially concerned that the final scenes of this book would prove unsatisfactory, as like everyone else these days, I know far too much about what a tricky business it is to come out of an epidemic. But I hadn’t taken into account that Bujold knows her way around medical matters sufficiently well to bring the whole crisis to a satisfactory conclusion, including a couple of really nice touches along the way. As ever, a cracking read from one of our most talented SFF authors alive today. Highly recommended for anyone with a pulse, who enjoys an engrossing story that won’t take up a huge slice of life to get through it.
10/10