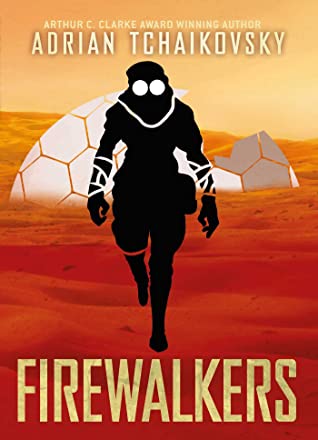 waiting for their ride off the dying Earth? They can buy water. And as for power? Well, someone has to repair the solar panels, down in the deserts below. Kids like Mao, and Lupé, and Hotep; kids with brains and guts but no hope. The Firewalkers.

I won’t deny that initially I struggled a bit with this one. This setting is brilliantly portrayed and therefore rather on the bleak side. Tchaikovsky’s depiction of a parched, dying world where not even heat-adapted animals and vegetation can any longer survive is very well done. As ever, he manages to weave in Mao’s back story in with the ongoing action so that I quickly bonded with this gutsy, capable youngster, struggling to keep himself and his family fed and watered in this harsh environment. The science is well done, again, without holding up the pace with chunks of indigestible information. And soon enough, I was caught up in the adventure as the three youngsters set off into the heat discover why the power from the solar panels isn’t getting back to Anchor.

I couldn’t see how this was going to end in anything other than a rather downbeat, grim message about what we were doing to the planet – and though I won’t deny that is wrapped up within the story – Tchaikovsky also manages to deliver an ending with plenty of hope, after a tale packed full of incident and well executed story twists. Overall, I thoroughly enjoyed this adventure and it comes highly recommended for fans of clif fi and coming-of-age stories in challenging settings. The ebook arc copy of Firewalkers was provided by the publisher through NetGalley in return for an honest opinion of the book.
9/10