I am a fan of this series – see my reviews of Very Important Corpses, Death Shall Come, Into the Thinnest of Air, Murder in the Dark, Till Sudden Death Do Us Part and Night Train to Murder – but as I’d crashed midway into this series (a hobby of mine…), I’ve never got around to reading the first book. Until now😊. I was delighted when I spotted this offering on Netgalley, as I am pre-approved by this lovely publisher.

BLURB: Ishmael Jones is someone who can’t afford to be noticed, someone who lives under the radar, who drives on the dark side of the road. He’s employed to search out secrets, investigate mysteries 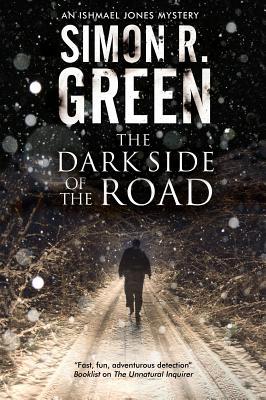 and shine a light in dark places. Sometimes he kills people. Invited by his employer, the enigmatic Colonel, to join him and his family for Christmas, Ishmael arrives at the grand but isolated Belcourt Manor in the midst of a blizzard to find that the Colonel has mysteriously disappeared. As he questions his fellow guests, Ishmael concludes that at least one of them not least Ishmael himself – is harbouring a dangerous secret, and that beneath the veneer of festive cheer lurk passion, jealousy, resentment and betrayal. As a storm sets in, sealing off the Manor from the rest of the world, Ishmael must unmask a ruthless murderer they strike again.

I was expecting some sort of Genesis story here, whereby we learn more about Ishmael and the adventures he had in his long, eventful life on Earth, before he started working for the Organisation. However, that didn’t happen. In fact, if I hadn’t been told that this was the first book in the series, I wouldn’t have guessed. Initially, I was a bit disappointed – but on reflection I think it probably is a strength of this series. Once more, Ishmael is plunged into a tricky situation whereby he is a suspected outsider, looking on a group who all have strong reasons to want to see the back of at least one of their companions. Attending a Christmas party at the urgent request of his boss, Ishmael finds himself driving through one of the worst snowstorms on record. He ends up at a country house in the middle of Cornwall, more cut-off than the moon from any outside help, when it all starts to kick off.

There are a series of gory murders and Ishmael is confronted with trying to discover who the perpetrator is. Green presents us with a series of twists – though I had already guessed who the perpetrator was. Though in this case, it wasn’t a question of finding out who so much as trying to discover how to stop the murderer. I liked the fact that superstrong and inhumanly fast Ishmael had met his match. While there wasn’t quite so much humour in this first offering, there was still enough to make me grin in amongst the mayhem, and it was clear to see the foundations of what has made this series so successful. Recommended for fans of paranormal suspense that doesn’t take itself too seriously. The ebook arc copy of The Dark Side of the Road was provided by the publisher through NetGalley in return for an honest opinion of the book.
8/10