This meme was started by Books by Proxy, whose fabulous idea was to compare UK and US book covers and decide which is we prefer. This meme is being nurtured by Lynn’s Book Blog and this week we are featuring covers with ARMOUR. I’ve selected The Fell Sword – Book 2 of the Traitor Son Cycle by Miles Cameron, see my review. 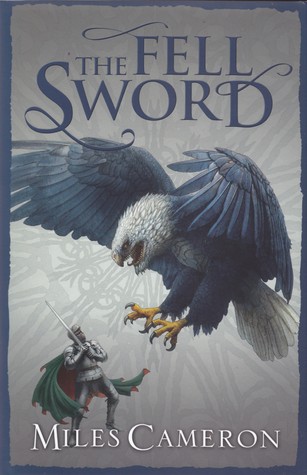 This offering was produced by Gollancz in June 2014. It’s stripped right back in a really interesting way – no castle or mountain in the background to distract, just that beautifully etched design. Which means all our attention is on the armoured knight fighting for his life against a terrifying monster with too much beak and claws. Look at the fabulous feathers that pick up the colour in the title font… There are some lovely details in this one, including that slightly uneven border, which shows  the thought that has gone into this one. As a result, it is really eye-catching. I also like the font, which manages to evoke the genre and historical period, without becoming impossible to read. Altogether, it’s a classy effort and my favourite.

Published in March 2014 by Orbi, this cover is almost the complete opposite of the previous one in approach. Instead of zooming out to show us the whole battle, we get a real close-up – to the extent that we can see the dents in the armour. We’ve no idea what this knight is fighting – indeed, we don’t even get to see the whole figure. That is left to our imagination. I really like it, too. And I especially approve of the treatment given to the title and author fonts, limned in electric blue lightning, as if struck by magic. It’s nicely done and brightens up what could have been a rather dark cover. 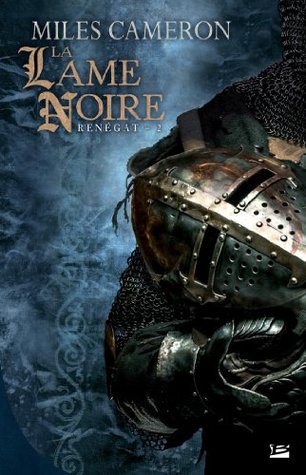 This French edition, published in August 2014 by Bragelonne, is another classy design. It has taken the same approach as the Orbit designers, going for the close-up – this time we get a shot of the knight’s helm carried in his arm – note the blood spatter… The same electric blue lighting is used, this time as a backdrop to the main figure, rather than to highlight the title and author fonts. While I like the treatment, particularly of the title, my one niggle is that it is too small for the scale of the cover.

This German edition, published in September 2014 by Heyne has grown on me. Initially, I thought it rather underwhelming in comparison with the previous offerings – but the more I see of it, the more I like it. The blue colouring, more intense towards the edges and fading to a brighter shade in the middle is both attractive and effective at drawing our eyes to the centre of the cover, where the etched outline of a heraldic device is traced, with a dragon helm right in the middle of it. And the slight smudging of the author name and title is really effective.

This Russian edition, published by Фантастика Книжный Клуб in October 2019, is in effect, the Gollancz cover flipped around, so we see more of the back of the creature as he faces down the knight. For some reason best known to himself, this chap sees fit to fight without his helm on, and wearing a cloak. He clearly hasn’t read the memo about how lethal cloaks can be in combat – and what happens if a claw gets pass your defence and rakes your face. While I do like it, I’m not quite as keen on it as I am the first cover, due to the daft decisions by the knight. Which is your favourite?