I’m a real fan of Scalzi’s writing – I enjoyed his Old Man’s War series and absolutely love the Lock In series, which has redefined crime fiction, by putting a futuristic spin on it, so that crimes are committed and solved in ways that right now are impossible – see my review of Lock In and Head On. So I pounced on this epic space opera series – see my reviews of the first two book in this trilogy – The Collapsing Empire, and The Consuming Fire. Has this third and final book in this interesting trilogy managed to bring this ambitious adventure to a satisfactory end?

BLURB: The collapse of The Flow, the interstellar pathway between the planets of the Interdependency, has accelerated. Entire star systems—and billions of people—are becoming cut off from the rest of 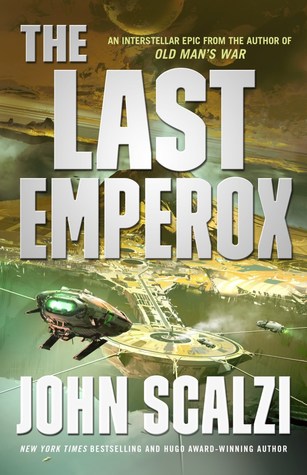 human civilization. This collapse was foretold through scientific prediction… and yet, even as the evidence is obvious and insurmountable, many still try to rationalize, delay and profit from, these final days of one of the greatest empires humanity has ever known. Emperox Grayland II has finally wrested control of her empire from those who oppose her and who deny the reality of this collapse. But “control” is a slippery thing, and even as Grayland strives to save as many of her people from impoverished isolation, the forces opposing her rule will make a final, desperate push to topple her from her throne and power, by any means necessary. Grayland and her thinning list of allies must use every tool at their disposal to save themselves, and all of humanity. And yet it may not be enough. Will Grayland become the savior of her civilization… or the last emperox to wear the crown?

Unusually I’ve included the complete blurb, because you need to understand the extent of Scalzi’s ambition in depicting this world. The Interdependency has existed for a thousand years, after a series of wars that nearly snuffed out humanity – and Rachela, the very first Emperox, put in place a system on which each planet or colony outpost needs supplies and raw material from elsewhere in order to exist. So the Interdependency continues to thrive on mutual dependence – which has worked well enough, until now, when the space pathways that allow ftl travel are starting to collapse…

There is a really nifty Prologue with nicely reminded me of the situation and the main characters in the frame, without feeling like an info-dump, and once more I was scooped up into the middle of the infighting and social shark tank that is Grayland II’s court. Though despite this helpful update, I would strongly advise that if you’ve picked this one up without having read the previous two books, then put it down again and go hunting for them first. This book is essentially a continuation of the overarching story, so if you don’t actually flounder, you’ll be missing far too much of the backstory to be able to fully appreciate the scope of what is going on.

There is an interesting dynamic, wherein Scalzi has ticked all the boxes for writing an epic space opera adventure, but at the same time has included the kind of snark and edged humour more commonly encountered in urban fantasy. There are a couple of characters who are very sweary, so if you are offended by liberal use of the f-word, among others, then you’d be better off giving this one a miss. But dear Emperox Grayland II isn’t one of them and I love her principled stand, refusing to take the easy way out by saving just the nobility, but attempting to ensure the billions of her subjects also stand a chance, too.

This one buckets along at a fair clip, with some major plot twists that I simply didn’t see coming and left me reeling. To be honest, I’m still trying to process the ending… because it really, really isn’t the conclusion I was looking for, or wanted. Yet, as it was explained, I have to accept that realistically speaking – it was the only possible outcome. Does it work? Oh yes. It’s also really clever. But, even so…

That said – I don’t feel I’ve been cheated, or short-changed in any way and I certainly don’t regret having dived into the rambunctious world of the Interdependency, even if I’ve surfaced a tad dazed and battered. Recommended for fans of enjoyable, well-written epic space opera. The ebook arc copy of The Last Emperox was provided by the publisher through NetGalley in return for an honest opinion of the book.
9/10