Once I’d listened to the wonderful audio version of Mythos, see my review – I was keen to get hold of this sequel, which takes the story on from featuring mostly on the Greek pantheon of gods, to the mortals and demi-mortals that people this mythology.

BLURB: There are Heroes – and then there are Greek Heroes.
Few mere mortals have ever embarked on such bold and heart-stirring adventures, overcome myriad monstrous perils, or outwitted scheming vengeful gods, quite as stylishly and triumphantly as Greek heroes. In this companion to his bestselling Mythos, Stephen Fry brilliantly retells these dramatic, 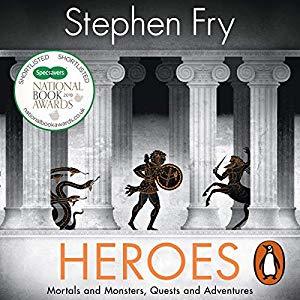 funny, tragic and timeless tales. Join Jason aboard the Argo as he quests for the Golden Fleece. See Atalanta – who was raised by bears – outrun any man before being tricked with golden apples. Witness wily Oedipus solve the riddle of the Sphinx and discover how Bellerophon captures the winged horse Pegasus to help him slay the monster Chimera. Filled with white-knuckle chases and battles, impossible puzzles and riddles, acts of base cowardice and real bravery, not to mention murders and selfless sacrifices, Heroes is the story of what we mortals are truly capable of – at our worst and our very best.

I’ve included the whole blurb – something I rarely do – because it pretty much sums up what the book is about. Fry clearly knows his stuff and has gone back to the available source material to pick his way through the various versions and delivers these timeless stories in an accessible, conversational style that I very much enjoyed. We have most of the familiar names such as Heracles and Theseus, as well as many of the monsters they tangled with. What came across very strongly – and why I was so grateful for Fry’s light touch – was how most of them ended in tragedy. If you wanted to have any kind of happiness in your life as an ancient Greek, whatever you do – don’t be beautiful or remarkable in any way, so as to catch the attention of the gods. Even those who managed to survive a series of harrowing adventures and fights against impossible odds invariably ended in ignominy and a bitter old age.

To be honest, I don’t think I would have been able to continue listening if Fry had been remotely heavy-handed in his treatment of this fascinating, but ultimately depressing series of stories where the price of any kind of talent or beauty was to suffer a series of terrible fates. And that would have been a shame – because, whether we like it or not, these stories are part of the bedrock of our western civilisation and many of the ideals and beliefs have been unconsciously absorbed into our collective psyche. For anyone interested in the subject, I would recommend the audiobook, where Fry’s handling of all those unfriendly Greek names makes it a lot easier to absorb.
10/10