I’d read the hardback version of this book when it first was released and thoroughly enjoyed it – I love Tiffany Aching – and also read it aloud to the oldest grandchild. But this was the first time I’d had the pleasure of listening to the story…

BLURB: No real witch would casually step out of their body, leaving it empty. Tiffany Aching does. And there’s something just waiting for a handy body to take over. Something ancient and horrible, which can’t die. To deal with it, Tiffany has to go to the very heart of what makes her a witch . . . 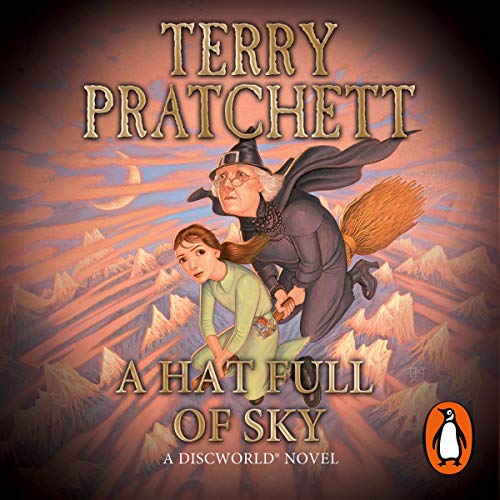 While this book can be read as a standalone, it will make more sense if you have read the previous Tiffany Aching book, The Wee Free Men, which also features the little blue-skinned, tartan-wearing, fight-loving fae folk who live on the chalk. What you don’t have to do is read the previous thirty-one Discworld books to enjoy this offering, as it is part of a spin-off series more precisely aimed at younger readers. This adult, like many others, absolutely loved it.

I had registered, when reading, what a quirky authorial viewpoint Pratchett adopts but listening to it really brought home just how much he tends to cover in semi-omniscience, so that we get the author as storyteller nested within the narrative. I’m still trying to work out why it doesn’t grate with me, when generally it’s a point of view I hate. It probably helps that it is often very funny – which was the other aspect that struck me while listening. I was regularly laughing aloud at the exchanges between Tiffany and the Nac Mac Feegles and on one particular occasion, Tiffany and Granny Weatherwax.

The Nac Mac Feegle have adopted Tiffany as their ‘wee hag’ – their witch – and when they realise she is in danger, a hand-picked band of tiny warriors led by the brave Rob Anybody set off after her to try and save her. Their adventures are both hilarious and full of tension, something Pratchett does very well.

Tiffany is a wonderful character, yet reading this one reminded me all over again just how awesome Granny Weatherwax is – I’m aiming to use her as my role model. Though perhaps without the faded, tatty black dress, hand-made hat and hobnailed boots. I love Pratchett’s take on witchcraft and suspect, somewhat sadly, that many elderly women burnt in previous centuries as witches had adopted the role of doctor and agony aunt in the manner of hardworking Mistress Level, the witch to whom Tiffany is apprenticed. Because under the jokes and humour are some important messages – that there is power in giving, as well as taking and that often cruelty and aggression is often born of fear, rather than strength.

This read is definitely a mood-boosting book and comes highly recommended to fans of quirky, enjoyable writing – Pratchett is one of those rare authors who defies genre boundaries.
10/10