I read and enjoyed Termination Shock – see my review – so I was pleased to see Interdicted Space available at Netgalley and was delighted to be approved to read and review it.

BLURB: The universe needs saving, but is this makeshift crew really the stuff of superheroes?
Nivala’s first interstellar patrol is interrupted by extremely unwelcome visitors. Mallivan may have to take them on board; he doesn’t have to like it. His vociferous crewmembers certainly don’t. He is right 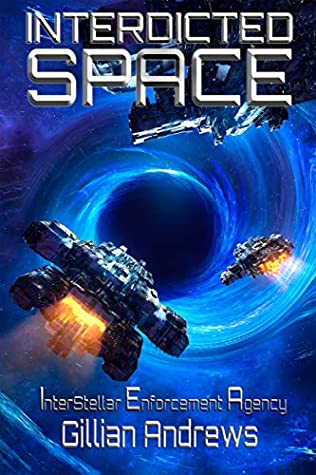 to be concerned. The youngest member of the team is in imminent, grave danger. People covet her privileged link to the mighty Chakran aliens, who can unlock spacetime itself…

While I enjoyed the first book, this is the one where Andrews hits her stride. Mallivan has always been good at thinking on his feet, but we see him continue to grow in experience as he continually gets pitchforked into the middle of life or death situations. I like the fact that he finds himself having to cope with the fact that some of those he leads into fights don’t return – the fact that people die matter in this adventure. And we also have Bull Cunningham making a reappearance – the antagonist I particularly love to hate. He’s well drawn. Charming and persuasive, he manages to make his stance sound very plausible – and it’s an interesting change to see the representatives for humanity on the wrong side, morally, which puts Mallivan at odds with his own species…

There is an interesting mix of aliens serving alongside Mallivan, mostly having been thrown together in the former book – particularly featuring young Zenzie, the eight-year-old who is bound to Mallivan by the ‘Savior Protocols’ after he saved her life, for as long as she lives. An offspring of a formidably gifted race, she was frankly something of an unbearable brat in the first book – however, this time around, while she still has her smug moments, there is a major plotline involving her and I was a bit shaken at just how emotionally invested I was in her continued wellbeing. It takes some writing chops to turn around a reader’s initial perception of a character to the degree that Andrews manages during the course of Interdicted Space.

I also liked the fact that Andrews clearly knows her science – in amongst the mayhem, we get plenty of slices of techie information that satisfied my inner nerd, without slowing the pace or throwing us out of the story. The only sticky point in this pleasing adventure, was the info dump right at the beginning, which I could have done without. Once that was out of the way, the pace picked up and I was swept away by the problems of Nivala and her plucky crew. I’m delighted that the third book in the series was published in January – I’ll be getting hold of it. Space opera this entertainingly enjoyable is not to be passed up when I’m this desperate for escapist adventure. Highly recommended for space opera fans – though I’d advise you to get hold of Termination Shock first. Like many indie books, these are very reasonably price and represent excellent value for money. The ebook arc copy of Interdicted Space was provided by the publisher through NetGalley in return for an honest opinion of the book.
9/10