This meme was started by Books by Proxy, whose fabulous idea was to compare UK and US book covers and decide which is we prefer. This meme is being nurtured by Lynn’s Book Blog and this week we are featuring EXOTIC covers. I’ve selected WWW: Wake – Book 1 of the WWW series by Robert Sawyer – see my review.

This edition was produced by Ace Hardcover in April 2009. It’s a gorgeous cover, so pretty and unusual. As is often the case with particularly effective designs, it’s become the default cover for the book and quite right, too. Being the nitpicky misery that I am, I’m still huffing in exasperation at those nasty little textboxes that truncate this lovely effort. Why not do away them altogether? I also think the title font deserves more attention – it could have been far more exciting, against such an amazing backdrop. However, this one is certainly my favourite. 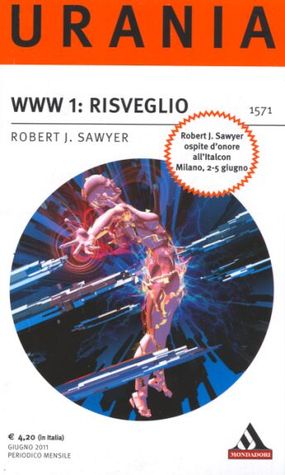 Published in June 2011 under the publishing imprint Urania by Mondadori, this Italian edition is one of the exceptions that hasn’t used the above cover. While I like the image, which I think is arresting and rather beautiful – I can’t work out why it is limited to that measly little circle, leaving an uninspiring expanse of white cover. Clearly, Urania has a number of devoted fans, otherwise I can’t think of any other reason why the publishing imprint would feature more prominently than the title or author.

This audio edition, published by Brilliance Audio in March 2010, is another, more successful, departure from the default cover. To be honest, this was so very nearly my favourite. For starters, the treatment of the author and title fonts work so much better. And once again, I love the colours and patterning – it is beautiful. But I really lost my heart to the first design… 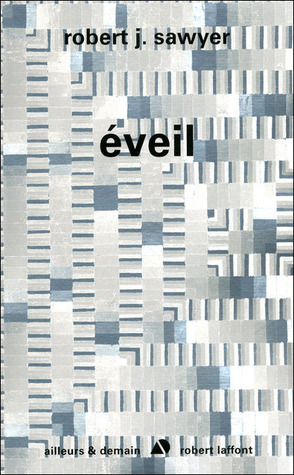 This French edition, produced by Robert Laffont in February 2010, is taking a more monochrome approach to the personification of the internet. That said, it is a clever design as the more you look at it, the more you see. However, again, I think the title and author fonts have been badly handled. Why use black lettering against a backdrop of grey? Surely a bright red or glowing yellow embossed font would nicely pop, drawing the attention of potential readers?

This Chinese edition, published by 貓頭鷹出版 in December 2012 has another attractive design. Though I think it is spoilt by that ugly black textbox with all the chatter cluttering up the cover – given that the title is already incorporated within the artwork, it seems entirely unnecessary. Which is your favourite?