I loved An Easy Death, as Charlaine Harris has been a solid favourite of mine for years – see reviews of Grave Sight, Dead Reackoning, Shakespeare’s Landlord, Midnight Crossroad, Day Shift and Night Shift, so I was extremely excited to hear that A Longer Fall was due and Himself insisted that we pre-order it. I do love that man!

BLURB: Lizbeth Rose is hired onto a new crew for a seemingly easy protection job, transporting a crate into Dixie, just about the last part of the former United States of America she wants to visit. But what seemed like a straight-forward job turns into a massacre as the crate is stolen…

The blurb goes on for a bit longer, but you get the gist. I love Rose and the way we are right inside 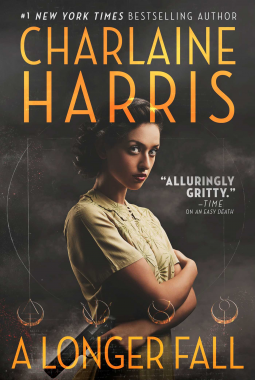 the character from the first page – Harris has a knack of drawing me right into the middle of her worlds in no time flat and this time around was no exception. This dystopian, alternate history where the Russian monarchy managed to flee before they were all massacred and are now living in a corner of a very different America, works really well. The magical element is also deftly introduced and I enjoy the tension and dislike that surrounds these magic-users, which makes complete sense.

I was hooked and read late into the night and early morning to discover what happened next. Rose teams up with a former colleague while plot twists come thick and fast as they fend off a variety of threats. In the meantime, there is also an interesting romantic thread running alongside the adventure which somewhat complicates things for Rose. One of the delights of this one, is that I simply didn’t know what was going to happen next.

However, I wasn’t completely won over by the MacGuffin that very abruptly stopped all the mayhem and violence. I recently had a rant about female protagonists in fantasy books who suddenly are riding into battle alongside the men, without there having been any real attempt to explain what dynamic has changed to make this possible. I felt in a similar fashion here, that a whole bunch of deep-seated, difficult issues in the small town of Sally were given a flimsy makeover in order to bring the story to a rather unsatisfying conclusion that didn’t convince me. It didn’t mean the book went flying across the room, and I still very much enjoyed Rose’s personal journey, which was brilliantly explored throughout the book – but I have knocked a point off for the way the main plot gets wrapped up. That doesn’t prevent this being an action-packed, western-flavoured fantasy adventure well worth picking up – and we’ll certainly be pre-ordering the next instalment.
8/10