The Festival Murders – Book 1 of the Francis Meadowes series by Mark McCrum
5%: ‘I happen to know,’ Dan went on, looking straight at Bryce, ‘that the Sentinel’s reviewer wrote a couple of truly shocking novels a couple of decades ago. Which never even saw the light of day.’

This was a bit below the belt. Bryce hadn’t published his early fiction; to his knowledge, Dan had never seen it. As the heads of the audience turned towards him, Priya squeezed his arm and looked supportively up at him. 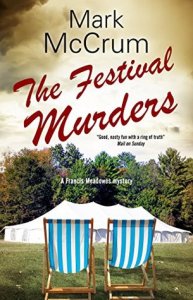 BLURB: At the start of one of the English summer’s highlights, the annual literary festival in the pretty little country town of Mold-on-Wold, famous critic Bryce Peabody is found dead in his bed at the White Hart Hotel. At first it seems as if fifty-something Bryce might have succumbed to a heart attack, but the forensics team soon uncover evidence of something more sinister.

Bryce had made many enemies in the past, with his scandalous private life and scathing reviews. Could it be that one of the many writers he insulted in print has taken a bitter revenge? Or perhaps there’s a more personal reason? Unable to help himself, crime writer Francis Meadowes, who is also staying at the White Hart, is drawn into a role he knows only from his own fiction, that of amateur detective.

As you can see, I haven’t got very far into this one, but so far, so good. I am hoping that the author will have a bit of fun with this premise, as it is very much ‘Midsomer Murder’ territory and I love the tongue-in-cheek approach to some of the murder mysteries.