This meme was started by Books by Proxy, whose fabulous idea was to compare UK and US book covers and decide which is we prefer. This meme is currently being nurtured by Lynn’s Book Blog and this this week we are featuring FUTURISTIC covers. I’ve selected the classic sci fi adventure Use of Weapons – Book 3 of the Culture series by Iain M. Banks. I have linked this week’s Friday Faceoff to @SciFiMonth2019. 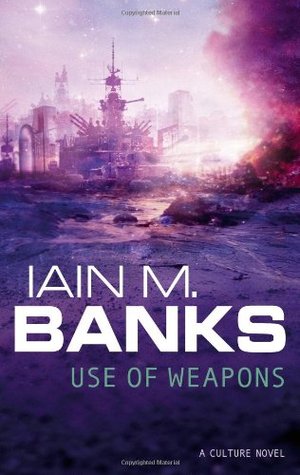 This edition was produced by Orbit in March 1993. I like the colour tones of the cover, but I’d like that cool, futuristic city to be more visible, rather than lurking in the background. And while I’m aware that it is Banks’ name that is selling the book, the title font is all but invisible in that colour against the background, the minute this cover gets minimised. 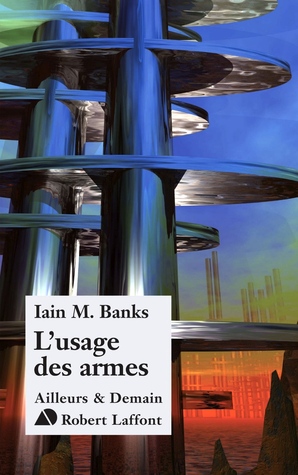 This French edition, published in November 2011 by Ailleurs & Demain, far more successfully evokes the feeling of a far future settlement. I love the use of those cool blues… This one would have been my favourite, but for that hideously ugly textbox plonked off-centre as a complete afterthought. What a shame!

Published by Le Livre de Poche in September 2007, this French edition is the reason why I picked this book for this subject. I love this scene with the huge mothership looming above with the nippy fighter craft zipping about and all those cool-looking futuristic weaponry on display. The title and author font has a pleasing synergy with the tone and feel of the cover design. I think this one nails it and is my favourite.

This Hungarian edition, published by Agave Könyvek in 2006, takes a different approach. I get the sense that you wouldn’t want to be sitting in that chair with all those nasty, sharp-looking armaments pointing at you… This cover radiates an effective sense of menace, but the title font is again, very underpowered when set against that punchy artwork.

This German edition, published in April 2015 by Heyne Verlag, is a great spacescape – what’s not to love? While it hasn’t got the cool detail of the French edition, it’s space, baby! And both author and title font also are effectively displayed and complement the design. Which is your favourite?