Last week I was travelling home from Bristolcon and as our train was delayed and in order to avoid a bus trip for the last leg, Himself drove to Southhampton to pick us up, we got home later than we had planned and I was frankly too exhausted to sit down and write a post.
I won’t be saying too much about Bristolcon here, because I do want to write a separate post about it.

Mhairi stayed over for the week, which was a real treat and left on Friday to go on a writing retreat with some friends. We had plenty of time to catch up with what each other is doing, and acknowledge the fact that we badly miss each other’s support and advice on a day-to-day basis. I was still able to continue with Fitstep and Pilates and as luck would have it, it was half term here, so I didn’t have any lessons to eat into my time with Mhairi. It was just a shame about the weather as we had planned to go for walks along the beach in between the writing. It didn’t happen on account of the rain.

cheap drugs to the poor, Jack’s latest drug is leaving a trail of lethal overdoses across what used to be North America—a drug that compels people to become addicted to their work. On Jack’s trail are an unlikely pair: an emotionally shut-down military agent and his partner, Paladin, a young military robot, who fall in love against all expectations. Autonomous alternates between the activities of Jack and her co-conspirators, and Elias and Paladin, as they all race to stop a bizarre drug epidemic that is tearing apart lives, causing trains to crash, and flooding New York City.
This thought-provoking read raises some interesting issues regarding the dynamic of power both in society at large and more interestingly, at an individual level in relationships. 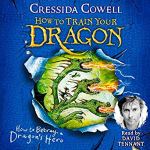 High up in the Treacherous mists of the Murderous Mountains, Hiccup and the Company of the Dragonmark are in hiding. The witch’s Vampire Spydragons are guarding the shores of Tomorrow — but Hiccup is determined to become King of the Wilderwest. Can Hiccup dodge the dragons and steal back the King’s Things from Alvin before the Doomsday of Yule? And is there a traitor in Hiccup’s camp who, in the end, will betray them all?
Annoyingly, I managed to skip this one before reaching the end of the series. But I didn’t want to miss out on any Hiccup goodness, so I’ve backtracked to listen to this slice of the adventure, in order to put off the inevitable heartache of admitting that I’ve finally come to the end of this marvellous, marvellous series.

The Mermaid and the Bear by Ailish Sinclair
Isobell needs to escape. She has to. Her life depends on it. She has a plan and it’s a well thought-out,

well observed plan, to flee her privileged life in London and the cruel man who would marry her, and ruin her, and make a fresh start in Scotland. She dreams of faery castles, surrounded by ancient woodlands and misty lochs… and maybe even romance, in the dark and haunted eyes of a mysterious Laird. Despite the superstitious nature of the time and place, her dreams seem to be coming true, as she finds friendship and warmth, love and safety. And the chance for a new beginning… Until the past catches up with her.
After enjoying her blog and learning that she has a book recently published, I decided to check it out. It is an enchanting historical romance with a lovely, large-hearted protagonist, who nonetheless has a hard time of it… Review to follow.

Journaled to Death by Heather Redmond

Divorced single mom Mandy Meadows scrapes by working as a barista and receiving payments from her cousin, Ryan, who rents her basement apartment. At night, she and her teenage daughter Vellum run a successful home business creating journaling content on their popular social media channels. But Mandy’s carefully organized world is about to come crashing down. While filming their latest journaling tutorial, Mandy and Vellum hear a loud noise on the basement stairs, and Mandy makes a horrifying discovery…
I’ve tweaked the rather spoilery blurb to this rather twisty whodunit. I’m not sure I’d classify this one as a cosy murder mystery. While it isn’t drenched in gore or horrific action scenes, Mandy’s life is frankly a slog while she struggles to balance two jobs and the needs of a teenager, living a hand-to-mouth existence. I really enjoyed the overall story, though, and will be reviewing it.

Interesting/outstanding blogs and articles that have caught my attention during the last few weeks, in no particular order:

SciFi Month 2019: Plot Your Course https://onemore.org/2019/10/17/scifimonth-2019-plot-your-course/ This is running throughout November and as a big fan of science fiction, I’ve been reading and writing reviews I hope to feature during the month. And read plenty of other folks’ too😊

Jerpoint Abbey Tour https://inesemjphotography.com/2019/09/14/jerpoint-abbey-tour/ It’s always a treat when Inessa features another picture tour on her wonderful blog – and this one is just magical…

The Perils and Pitfalls of Research https://writerunboxed.com/2019/10/30/the-perils-and-pitfalls-of-research/ If you need to research some additional material before starting the novel – at what point do you decide you have enough? Some really good advice here…

The Best Poems for November https://interestingliterature.com/2019/10/30/the-best-poems-for-november/ As ever, another interesting article from this invaluable site – I would just add that the Thomas Hood poem ‘November’ has a longer form, vividly describing the seasonal smogs that regularly used to envelope the larger cities at this time of year.

The Evolution of Dragons in Western Literature: A History by Yvonne Shiau https://www.tor.com/2019/10/23/the-evolution-of-dragons-in-western-literature-a-history/ I stumbled across this article by accident and loved it. I hope you do, too…