This one has been languishing in the depths of my TBR pile for far too long. So when I hit a bit of a reading slump after wading through two annoying books, I selected it hoping that the buzz when it first hit the shelves would fire up my enthusiasm too…

When Aladdin discovers Zahra’s jinni lamp, Zahra is thrust back into a world she hasn’t seen in 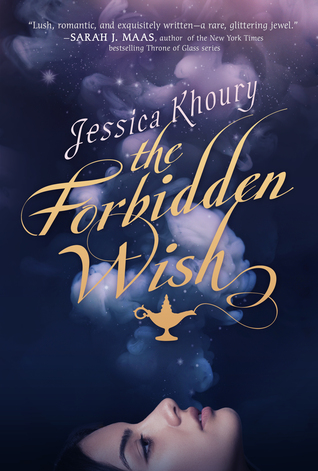 hundreds of years—a world where magic is forbidden and Zahra’s very existence is illegal. She must disguise herself to stay alive, using ancient shape-shifting magic, until her new master has selected his three wishes.

That is as much of the rather chatty blurb I’m willing to share. What caught and hooked me with this one was the strong characterisation of Zahra, the jinn trapped in the lamp. Her voice pings off the page right from the opening section when Aladdin blunders into the underground chamber where she has been trapped for hundreds of years. Having this famous story told from the viewpoint of the magical character who is able to transform his life with only three wishes is a really nice touch.

While you won’t be shocked to know that Zahra and Aladdin develop strong feelings for each other, I was pleased to see that the romance aspect of the story didn’t overwhelm the other interesting elements. Zahra is in this mess because of her love for another owner of the lamp, which ended in catastrophe. So she is reluctant to visit a similar fate upon Aladdin and everyone else in the city. Meanwhile, Aladdin is trying to negotiate his way through the brutal rule that saw his parents killed by passing himself off as someone else… The story whisks along at a lively pace, providing plenty of adventure, plot twists – many of which I didn’t see coming – and problems for Zahra and Aladdin. How was this going to be resolved?

There was an enjoyable supporting cast, with my favourite character being the beautiful and resourceful princess, Caspida and her wonderful watchmaidens. Concerned about the daily injustices visited upon the downtrodden populace, she is trying to keep her ailing father from further falling into the clutches of his evil brother. I really liked the fact that Caspida and Zahra are instantly drawn to each other – it is a refreshing change to have a YA book where all the female relationships are largely positive.

The romance was well handled and quite sweet – but for me the standout relationship was Zahra’s desperate yearning for a lost companion she loved years before, to the extent that she still talked to her. And while I was convinced of her growing feelings for Aladdin, I was pleased to see that they didn’t eclipse her sorrow or somehow make the past all okay. In short, Khoury has written a powerful, sensitive characterisation of a being who has lived a very long time and is something both more and less than human – and made me believe it. Highly recommended for fantasy fans who enjoy a well-told retelling.
8/10