When I saw this spinoff novel in the world of the Memoirs of Lady Trent series, I immediately bought it, even though we’re officially broke. There are limits, after all… we can always exist on fresh air and sunshine for a couple of weeks – but to go without a book like this? Nope – can’t do it. 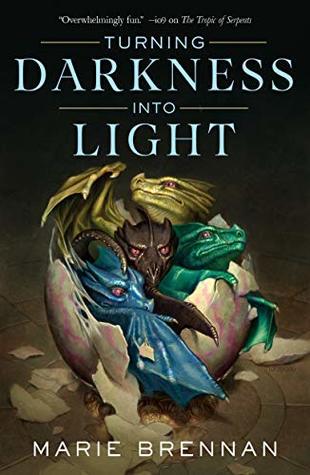 BLURB: As the renowned granddaughter of Isabella Camherst (Lady Trent, of the riveting and daring Draconic adventure memoirs) Audrey Camherst has always known she, too, would want to make her scholarly mark upon a chosen field of study. When Lord Gleinheigh recruits Audrey to decipher a series of ancient tablets holding the secrets of the ancient Draconean civilization, she has no idea that her research will plunge her into an intricate conspiracy, one meant to incite rebellion and invoke war. Alongside dearest childhood friend and fellow archeologist Kudshayn, must find proof of the conspiracy before it’s too late.

Despite claims that this would be a good entry point to the Lady Trent series, my firm advice would be – don’t touch it until you have read the complete series, apart from anything else, the book contains big spoilers to Within the Sanctuary of Wings and frankly, because of the nature of the narrative, I think you’d be floundering a great deal of the time if you tried plunging into this world via this book. As it has an epistolary structure, containing diary entries, letters, notes and translations of ancient Draconean tablets, I think you need to already have a good idea of the world and the political structure.

That said, I really loved this one. Brennan’s writing talent pings off the page as I quickly bonded with Audrey, brought up to disregard the rigid conventions of polite society, and passionate about the Draconean civilisation. She also happens to have been born into a family of high achievers – her grandmother, Lady Trent, blazed a trail with her insights into the life cycles of a variety of dragon species and her father is a world-famous translator of ancient languages. Audrey, notwithstanding her youth, is desperate to also make her mark – more particularly since she was robbed of a claim to fame by someone she’d trusted. This need drives her more than it should – and leads her into making some major mistakes. Cora, unloved and disregarded, is also someone I fell for in a big way, as well as dear, kindly Kudshayn, the draconian translator who helps Audrey with her huge task in translating these tablets.

The translations are beautifully done and the scholarly exploration of the ancient religion compared with the modern variant is perfectly achieved, with the mythological stories so well written, it was a struggle at times to remember they were a fantastic conceit nested within a novel. The initial pacing is leisurely, but once the enormity of what is going on began to emerge, I simply couldn’t put this one down. While the theme of prejudice and bigotry was all too evident, the theme that caught my attention, was the way that intellectual arrogance is also a snare that caught most of the main characters in some way.

I found this a fascinating read that crawled under my skin – I’m sure it will be one of those that stays with me and the only reason it isn’t getting a solid 10 from me, is that I did find myself skimming some of the myths, particularly at the beginning. Highly recommended for fans of the Lady Trent Memoirs series.
9/10