This meme was started by Books by Proxy, whose fabulous idea was to compare UK and US book covers and decide which is we prefer. This meme is currently being nurtured by Lynn’s Book Blog and the subject this week featuring on any of our covers is FEATHERS. I’ve selected The Devil’s Feather by Minette Walters as I think at least two of the covers are extraordinarily good…

This edition was produced by Alfred A. Knopf in August 2006 and is a strong contender. I love the drama of that red feather against the black background – a classic colour combination that always works well. For once, I’m not complaining about the rather ordinary white font, because with the red strands of feathers threaded through them, it gives that special lift so many title and author fonts lack. Overall, this classy offering is eye-catching and clever, with a strong clue as to the genre – what more could you ask from a cover?

Published in October 2006 by Pan Books (UK), this is also a really stylish design. The feather with the girl’s eye looking through is both arresting and original. I also very much like the author font – and given that is the book’s selling point, it makes sense to make that the major feature. However I’m less impressed with the chatter in the middle of the design, cluttering it up and diminishing the visual effect.

This edition, published by Macmillan in September 2005, shows what a huge impact colours can have. While the previous cover with the white background and tawny feather was eye-catching – this one with the black background and that single feather with the eye looking through is sheer class. Much as I love the first cover, this is the one that actually lifted the hair on the back of my neck. And no chatter across the cover to spoil that fabulous effect either!

This Dutch edition, produced by De Boekerij in 2006, is also an interesting cover. The view has the reader trapped behind a screen watching birds wheeling in the sky – the greenish hue and the whole design is really disturbing. While it isn’t my favourite, I do think it is effective at making me stop and look twice at what is going on. If I have a peeve, I think the small title font is underwhelming and an odd choice. 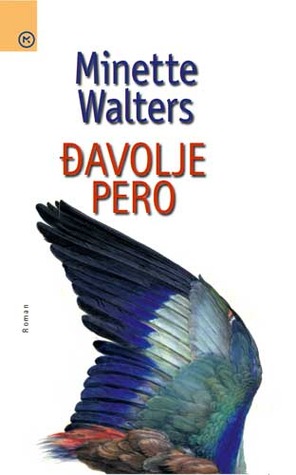 This Croatian edition, published in 2006 by Mozaik knjiga, is the most disappointing of all my choices and has more of a feel of someone let loose with photoshop. While a plain white background can be effective – as in the second choice – this time around it simply looks as if they couldn’t be bothered to add another layer of visual interest. And though I appreciate that the wing chopped off like that is supposed to somehow look wrong – it isn’t the right kind of wrongness, more that the design doesn’t hang together. Which is your favourite?