I had bought this one for my dyslexic grandson back in the day when he relied on his Audible reads to keep in touch with the world of books – but I didn’t have a kindle back then that could cope with audiobooks. I have now… 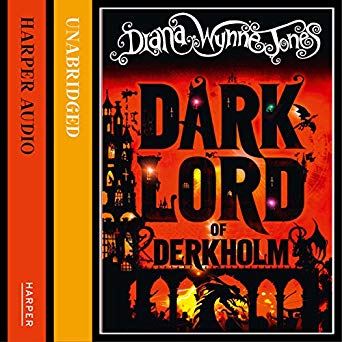 Everyone – wizards, soldiers, farmers, elves, dragons, kings and queens alike – is fed up with Mr Chesney’s Pilgrim Parties: groups of tourists from the world next door who descend en masse every year to take the Grand Tour. What they expect are all the trappings of a grand fantasy adventure, including the Evil Enchantress, Wizard Guides, the Dark Lord, Winged Minions, and all. And every year different people are chosen to play these parts. But now they’ve had enough: Mr Chesney may be backed by a very powerful demon, but the Oracles have spoken. Now it’s up to the Wizard Derk and his son Blade, this year’s Dark Lord and Wizard Guide, not to mention Blade’s griffin brothers and sisters, to save the world from Mr Chesney’s depredations.

I know this one is advertised as a children’s read – but it certainly didn’t feel that way to me. Mr Chesney’s Pilgrim Parties are portalled in from another, non-magical world (which sounds very much like our own…) where the pilgrims are promised – and expect – the full fantasy experience. Each group has a wizard guide as they are ushered around to take part in various skirmishes with pirates, avian monsters and a final full-scale battle against the forces of the Dark Lord, who they help overthrow. However, all these tours are taking their toll on the fabric and people exposed to this series of tourist incursions. While this is characterised as hilarious, and I found it both clever and witty – I wasn’t all that amused. I kept thinking of how the locals must feel on the Greek islands when they are overrun by hordes of British youngsters looking for loud music and drunken revelry… And they don’t have a Derk to deliver them from the constant, ongoing invasion. That’s only one example – I’m also aware of places like Indonesia where alongside five-star hotels are staff working long, thankless hours for a pittance as most of the income is hoovered up by the large multinational companies exploiting the natural beauty of the location.

Derk struggles to deal with numerous nit-picking organisational problems and as I continued painting the bathroom, I listened to the unfolding muddle, excellently narrated by Jonathan Broadbent. It was yet another joy – I am so enjoying my audiobook experience! This one is very highly recommended for anyone who enjoys intelligent fantasy adventures – but I shan’t be introducing it to my younger nine-year-old grandson, yet. Clever and precocious though he is, he simply won’t be able to fully appreciate the issues Wynne Jones is addressing in this clever, thoughtful book for another of handful of years.
10/10