This meme was started by Books by Proxy, whose fabulous idea was to compare UK and US book covers and decide which is we prefer. This meme is currently being nurtured by Lynn’s Book Blog and the subject this week featuring on any of our covers is PIRATES. I’ve selected How to Be a Pirate – Book 2 of How To Train Your Dragon by Cressida Cowell, which is one of my favourite children’s series ever…

Yes, for the second week in a row I’m featuring a children’s book. This year I seem to be reading rather a lot of them – just as I’d given up on making children’s fiction part of my reading challenge as I’d failed to read a reasonable number for the past three years in a row… 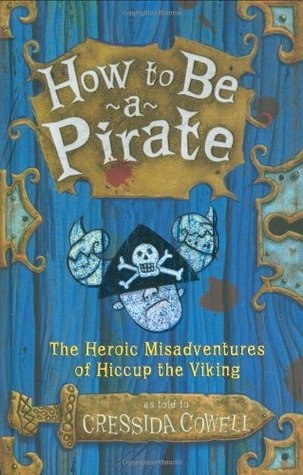 This edition was produced by Brown, Little and Company in May 2005. It is suitably quirky with a Viking-cum-pirate character clearly somewhat intellectually challenged as the main image on the cover. I like the background of planked wood, the quirky font and – unusually for me – I love the textbox looking like a treasure chest’s key plate and the dagger for the author name. However, that main image is rather unwhelming, I feel.

Published in February 2010 by Brown, Little and Company, I think this cover is more visually appealing, while keeping a lot of the successful aspects of the previous cover. I love the more eye-catching teal background colour and the fact that the textboxes are still enjoyably part of the overall design. However that image in the middle actually features a boat, a worried-looking Hiccup and a threatening dragon emerging from the waves… We get a sense that this is a proper adventure as well as being very funny.

This edition, published by Hodder Children’s Books in June 2017 was all set to be my favourite. I love the scaled background, the way the Viking longship bursts from the middle of the cover on a surfing wave – so clever and eye-chatching. And then I paused to take in the actual wording of the quirky font. And changed my mind… I’ve been listening to the series recently and frankly, it’s doing my head in. There are twelve books – and not one of the modern covers sees fit to inform the reader where in the series they come. In fact, the actual title of the book is dwarfed by the series name emblazoned across the top – very annoying! It’s a dealbreaker for me – so this isn’t my favourite, after all.

This Spanish edition, produced by SM in August 2006, demonstrates what a huge impact changing the backdrop can have. This cover features the same main design of the first cover – but what a difference. I don’t much care for it – that interlinking pattern doesn’t shout Viking to me and tends to give the whole cover a rather cluttered feel, which isn’t a good look for a children’s cover.

This German edition, published in June 2014, has decided to feature the dragon – I love that fantastic image of those two dragon eyes, snout and fangs peering out at a small Viking boy, presumably Hiccup. BUT that large title across the top of the cover is the series title – and once again there is no indication that this is Book 2. Without these issues, this would be my favourite alongside the Hodder edition – but this is such a major omission, I am going to have to plump for that second cover, which gives all the necessary details for a reader. Which is your favourite? Do you mind if a cover doesn’t provide all these details, so long as it looks good? I’d love to get your opinion on this issue!